Saif Ali Khan has libraries wherever he lives — he has one in his flat in Mumbai and a well-stocked one in his ancestral property in Bhopal.

However, I doubt whether he even reads the books that he so carefully keeps in his libraries. Otherwise, anyone, even with a pint-sized brain and little knowledge about sensitive topics like Religion, wouldn’t make the kind of statements that he has made recently.

From time-to-time, Saif Ali Khan does things that are absolutely beyond a rational human mind. A few statements from his recent interview may be counted as one of them.

According to Saif Ali Khan, loudspeakers are used in Mosques because Muslims are insecure.

Here’s a screenshot of the sweeping generalisation. This is the headline.

Headline of the Saif Ali Khan interview published on April 24, 2017 online by a leading media house

Saif Ali Khan explains in the interview that Muslims in India use loudspeakers because they are afraid as a minority in India. He also uses the phrase, “…as a precursor to some sort of Holocaust, it’s the first thing you think of.”

The whole paragraph is complicated, confusing and open to interpretation. The sentences have been constructed in such a way that it will shock you but at the same time, may be interpreted in a different light later on.

For context, here is the complete paragraph, where he speaks about Muslims being insecure as a minority in India and he throws in the term ‘Holocaust’ and ‘fear’. 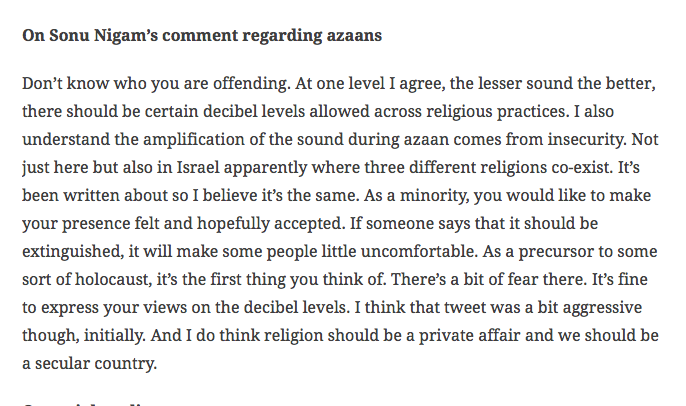 I am not going to interpret Saif Ali Khan’s words because it is a futile exercise. If I attempt it, then he might say that he meant something else and I am catching him on something that he hasn’t said.

But let’s look at the facts and records, something that Mr Saif Ali Khan has chosen to ignore.

Many mosques use loudspeakers as a call to prayer. It is called Adhan (Call to Prayer). The loudspeakers are used to let the surrounding Muslims know that it is prayer time and that they should congregate. It is a standard practice followed in many parts in India and many Muslim nations. There is no insecurity associated with it, neither it is an exercise to make one’s presence felt.

Point number 2. It is illegal to use a loudspeaker without a license. The Bombay High Court had passed an order in 2015 banning illegal use of loudspeakers from places of worship.

The Mumbai police had filed an affidavit at that time at the High Court, detailing how loudspeakers are misused at places of religious worship which included BOTH temples and mosques. Here’s a summary of the affidavit.

See Mr Saif Ali Khan? The loudspeakers are being rampantly misused without proper licenses. They are breaking the law and the honourable High Court agrees too. I am too keen to know where you are finding terms like holocaust, fear and….err… Israel (?!!).

Just for your information Mr Khan, the Muslim leaders in India too have agreed that loudspeakers are misused at places of religious worship and that they should be regulated as per the laws of the country. You may want refer to THIS or THIS article. I just found some for you, there are numerous others to prove my point.

I can labour on the point but that would be a stupidity. But I want to have the privilege of requesting Mr Saif Ali Khan to shut up if he is not aware of a topic and refrain from using terms that goes against the very nature of our country.

He has a responsibility when he is utilising a public platform to deliver his opinion and in my opinion, he looks like Donal Trump in this interview who sometimes speaks without knowing what he is speaking about.

Before we leave, here’s another quote from Saif Ali Khan for you to ponder upon. This intellectual quote is intended to be very deep and philosophical, probably the way Mr Saif Ali Khan wants us to perceive him.

You decide what it makes him look like…. specially when it appears in the same interview….

PS. None of the philosophers spoke about the “Death of God”. They meant something completely different from what is meant here, in this interview.

For more gems like these, you should read the full interview HERE.