Dear India. Who would you choose? Fawad or Firoz? 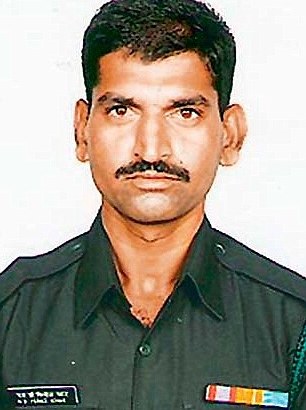 On your screen there are two Khans.

The one on the left is Pakistani superstar Fawad Khan. He has chosen to condemn terror attacks everywhere else except in India. His heart has bled for Peshawar and Paris but not for Pathankot. He is currently in Pakistan. He’s probably got a holiday from work.

On your right is Lance Naik Firoz Mohammad Khan. Firoz was killed at a forward post near the Line of Control (LoC) which is close to Bhimber Gali area of Rajouri district in Jammu. He died on October 15, 2013.  A mortar splinter hit him fatally during an intense and sustained firing from the Pakistani side of the LoC.

Many soldiers die for India along the LoC but Firoz’s case was different.

When Firoz died, he was technically on leave.

He was granted leave to celebrate Eid with his family by the Commanding Officer (CO) of the 38 Rashtriya Rifles.

As he was getting ready to leave for his home in Nawab Sahab Kunta in Hyderabad, news started trickling in that the LoC is under threat from Pakistan yet again.

Firoz refused to go on leave. He called his wife and two children and asked them to pray for him. He then requested his seniors to cancel his leave. His leave was not cancelled.

He picked up his rifle, strapped his boots and proceeded towards the forward post that very night. Hours later, a mortar splinter fired from the Pakistani side pierced through his spleen.

He bled to death.

There’s nobody left to remember Firoz today. Firoz is an Indian soldier who chose to face enemy fire than see his family on Eid.

If I have to choose between Firoz and Fawad. I will choose Firoz. Firoz is dead and Fawad has no comments to offer for the death of soldiers like Firoz.

After penning my open letter to Fawad Khan I decided to take a break from the topic. There were too many people following everything that I was writing and it made sense to keep quiet.

Besides, I strongly feel that everybody should have a voice and there was a healthy debate going on. The Pakistani media started responding to my open letter with more open letters, most of whom were directly addressed to me.

At the same time, I glanced through some of the letters. Most of them were high on insult-comedy and rhetoric. They made little sense. Only a handful of them had firepower, like this one from a doctor in Abbottabad which, in my opinion, is the best reply I have received.

I listed a few common arguments from the rebuttals.

Let’s look at the myths that these letters have so emphatically tried to establish as the truth.

As we speak, Pakistan has responded to the Indian ban on their artistes by imposing a blanket ban on Indian television channels and Bollywood films in Pakistan from October 15, 2016.

So, let’s puncture the bubble that Pakistan is hospitable towards Indian films and artistes.

We are actually even.