Yup, it’s Mr Kashyap. Which means grime, crime quite often for no reason or rhyme. Plus note the patented shady alleyways, a backdrop full of shades of grey, nightclubs where you shouldn’t stray. And so the heat is on, more scorching than the temperatures of the month of May.

Yet you’ve got to hand it to the maestro of kinky knee-jerk cinema. At the very least, he dares to travel into the verboten areas of darkness: occasionally brilliantly (especially Black Friday and Dev D) and oftentimes, annoyingly.(too many to list). Alas, Raman Raghav 2.0 falls into the latter category.

Blame this largely, on the conceited concept of refashioning the story of the real-life, psycho killer of Bombay of the 1960s, who had reportedly murdered 41 people randomly. The screenplay by Anurag Kashyap and Vasan Bala strives to be nudge-nudge-how-clever-are-we. But is it? Absolutely debatable.

So, if you’re expecting a biopic (not that it’s warranted) of the despicable Raman Raghav aka the Stoneman, banish the thought. In any case, it would have been too much of a bother and budget-escalating effort to recreate the atmospheric details of a bygone decade.

Also, an objective reportorial-style docudrama on that savage nightcrawler, already exists in the archives since 1991. Directed with controlled stealth by Sriram Raghavan and performed convincingly by Raghubir Yadav, that 45-minuter is quite a cult favourite with film students.

So, you’re awash with questions. Why reopen the can of weirdo worms all over again? Why update it to the year 2013? Just? For a smart-alecky twist to the déjà vu plot, believe you this, Raman now fetches up as the serial demon Ramanna (Nawazuddin Siddiqui) and Raghav is the police officer (Vicky Kaushal), who blows hot and cold on his trail.

And shiver your timbers, something vaguely profound is sought to be advanced. Seemingly, there’s just a hairline which separates the criminal from the law enforcer. Oink? Sure, there’s a kindergarten lesson to be learnt from that. Gurgle gurgle, thank you sir, for sharing a nugget of wisdom. Um.

Besides such a simplistic subtext, there’s precious little to be grateful for. Both the lead protagonists fail in enticing your sympathy or concern. If Reptilian Ramanna is cuckoo, Cop Raghav’s a cokehead, whose attitude towards women is shamelessly misogynistic. More: if the killer knocks the daylights out of a drug dealer, the cop abuses his licence to kill without batting an eyelid. Eeesh. How come? He has a bad dad complex, you’re informed, in the jukebox of his head.

Ensues a predictable cat-and-mouse game, with Cop Tom trailing the off-his-rockers Jerry. And vice versa. For thorough depraved stuff, the serial killer breakfasts on his sister’s family (this sequence is a chiller). Mercifully, most of the sado-masochistic violence is more suggestive than graphic. Thank you Kashyap sir again for the tender mercies. Images of a blood-caked iron rod, a cherubic boy held to gunpoint, not to forget the killer’s glowing eyes (courtesy, contact lenses) do linger on once the two-hour-plus malarkey has ended. Worry not. The disturbing visuals are the sort which can delete within a minute, at most two. 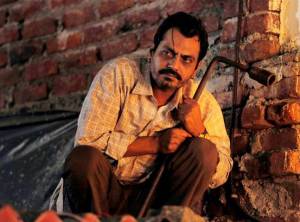 As for the interexchange of dialogue, these are strictly of the ponderously scripted kind. Examples: “I am God’s very own CCTV camera” and the confessional towards the end, which is more brain-boggling than philosophical.

Usually, Kashyap’s sidebar characters are lifelike and possessed of strong personalities (refer to Gangs of Wasseypur). In this 2.0. whatever, the cop’s drug-zapped girlfriend (Sobhita Dhulipala) has a striking screen presence, but cannot rise above a role which surrounds her in a purple haze.

As for Vicky Kaushal, he can’t quite match up to the showy acting pyrotechnics of Nawazuddin Siddiqui, who is indeed the prime reason for a look at this extra-pungent chicken curry.

You read right. In the Kashyap update, Ramanna enjoys rustling up chicken curry, a reference to the Stoneman of the ‘60s, who confessed all to the police in exchange for a chickenwala meal.

The music score has its mood-enhancing moments. Joy Oza’s cinematography and Aarti Chadha’s editing are sharp, inventive and more pulse-pounding than the story material.

Unsolicited suggestion: check out this 2.0 number only if you’re a hard core Kashyap and Siddiqui tracker. If not, treat yourself to a curry, veg or non-veg.

Original Link Of the Review