The rules of the game, changed

We have been friends for more than a decade but only a few knew that Bengali filmmaker Anindita Sarbadhicary is in her second trimester of pregnancy.

She had carefully kept the news under wraps.

Most women get pregnant, so what was so great about Anindita’s pregnancy? Why was it such a big secret?

The difference is this: This 1994-graduate of the National Film and Television Institute (NIFT) bought the sperm over the counter from a sperm bank!

Anindita’s story is a rare instance of a woman coming out in the open about her decision to have a baby from a sperm donor.

Till date, a number of celebrities have come out in the open about their adopted children or babies through surrogate mothers. But Anindita has raised the bar.

She is the first woman who finally made up her mind to declare that the official identity of her child’s father will be nothing but a ‘sperm donor’.

That is what makes Anindita stand out. And here’s her amazing story.

‘The sperm was the cheapest item in the package’

Anindita says that the sperm that she procured from a sperm bank in Kolkata cost her a few thousand rupees. She says that she has spent more money in preserving the sperm.

“Actually buying the sperm was the cheapest,” she laughs,  “The whole process is quite painstaking and takes a huge toll on your body. I am 39 years old now and I started the process when I was 38. It actually took me two years to make up my mind.”

Anindita spoke to me while she was on her way to south Kolkata’s Kafila restaurant to satisfy her pregnancy cravings.

“My mother is playing the baby’s father’s role now. She is taking me out for lunch. I’m excited. Everybody is telling me how happy I am looking and how I have put on weight. They think I am head-over-heels in love. They are right, I am already in love with my baby,” she adds. 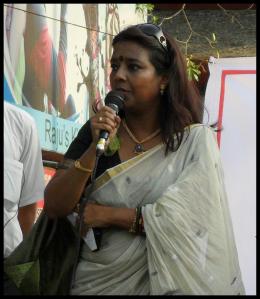 She informs that the baby is due on January 20 next year. “I am being treated under Dr Rohit Gutgutiya at Nova Hospital (which is at Minto Park, near Elgin Road, Kolkata). This is for the first time I am opening up and saying ‘yes, I am having a baby from a sperm donor and I am proud of it’. I don’t want to listen to people who are advising me to keep this as a secret. My father and mother have wholeheartedly supported the decision,” she says on the phone.

The process, she narrates, was not an easy one. Anindita admits that the first attempt to artificially inseminate her failed miserably when she had a miscarriage last year on Saraswati Puja (January 28, 2012).

“I was trying to get pregnant since last year. I had a miscarriage on Saraswati puja. Everybody around me was celebrating when I realised that something had gone wrong with my pregnancy. I couldn’t tell anybody and went to the hospital all alone to report the miscarriage. A couple of months later, my doctors said that I should not lose hope and try again. I got pregnant in the second attempt. The embryo was successfully transplanted in my body on May 3, this year. After a few months, the doctors told me that I have successfully held the baby in my womb. I cannot wait to see the face of my baby now,” adds Anindita.

‘I want to have the baby sooner’

Anindita says that she may have the baby sooner as she had already opted for a C-section. “I am not bothered about the fact that my child won’t have a father. I will happily tell my baby that I am both his father and mother. One of my senior colleagues (of the political party she associates with) had expressed his anguish about the quality of the sperm. I told him that I have been given all possible information by the doctor about the donor. I know his height, profession, health status and IQ level. I think my baby has got good genes. The rest is upto me and how I bring the baby up. And of course, it’s upto the people if they are ready to accept the baby who has no father,” Anindita says.

The process at the hospital was quite expensive and Anindita admits that it has already cost her Rs 5 lakh to conceive. But the joy of having a heart beating inside her surpasses everything else, she says.

“After fertilising the embryo outside your body, they put it inside you through an operation. It’s done under full anaesthesia but later when I saw the DVD, it appeared like a ray of white light was entering inside my body. I cannot describe the feeling. Likewise, I won’t be able to describe the feeling when I first heard a beating heart inside me (during her second ultrasonography),” says Anindita.

Anindita’s closest friends have formed a protective ring around her. “Everybody, from my friends to the people at the hospital, are so possessive about me that it feels that the baby has already got a hundred fathers. It doesn’t matter to me anymore that my baby will have a single parent. He or she already has parents who are eagerly awaiting his/her birth,” Anindita says.

Before we ended the interview, I asked her what actually prompted her decision to have a baby from a sperm donor.

‘Can’t wait till I turn forty’

“I made up my mind when I turned 38 last year. I told myself that I should not wait for a man to come and marry me because I want a child. Why is that only married couples can have babies? Should I be denied the joys of motherhood just because I have decided not to get married? I would be turning 40 years in two years and I cannot let my biological clock tick away just waiting for a man to come and marry me. I spoke to my mother (Ila) and my father (Supriyo). We all agreed to change the rules,” says Anindita.

You have really changed the rules of the game, Anindita.