While we are too busy worshipping films that made 100-crores plus at the box office, have you ever spared a thought about the hit-flop ratio in Bollywood?

Truth be told: Close to 90% of the films never manage to recover its investment at the box office.

Has it ever struck you how so many films manage to release every Friday though most never manage to recover their investments?

With such mounting losses, how do so many films release each year that makes India the largest film producing country in the world?

I recently managed to speak to two government officials. One of them was associated with the recent raid at an office of a reputed Bollywood producer and he revealed a shocking truth.

In India, most mid-level businessmen have a lot of surplus cash that they cannot show in their account books. It is a not good idea to hoard this unaccounted cash, or black money as it is popularly known. Some businessmen who are looking for opportunities to keep this money into circulation, turn to Bollywood for help.

“Investing in a Bollywood film is still the best way to keep the money in circulation and earn some profit out of it as well. So, if you invest in Bollywood films, you will be able to circulate the black money and turn some of it into white. This is what lures people into investing their black money in Bollywood,” said the IT officer.

The scenario in India has changed over the last five-six years as foreign studios have forayed into the market. The business of movie-making is increasingly turning into a corporate affair with proper account books being maintained at every level and competent CA firms getting involved right from the pre-production stage.

Despite the advent of such professionally managed companies, accusations of money laundering through films have not reduced. According to another officer of the EOW (Economic Offenses Wing), money laundering in Bollywood has become a more complicated business than before.

I will now try to explain the money laundering business in the simplest terms possible. Everyday people are introducing innovative ways to launder money in Bollywood. For now, here is the tried and tested business model.

THE BUSINESS OF MAKING FLOP SHOWS

In Bollywood, there are several investors (they call themselves filmmakers too) are constantly on the lookout for businessmen who are ready to invest in cash. All you need to do is to contact these ‘filmmakers’ and tell them that you have surplus cash that you want to invest.

For clarity’s sake, we assume that you want to invest 10 crores in a film.

The ‘filmmaker’ will give you a deal which will be typically like this – “We will officially show that you have invested only 5 crores. You should pay 5 crores in cash. At the end of the film, you will get your investment back. If the film makes money at the box office, you will be paid a good interest on the official investment ( 5 crores).”

If the film doesn’t give any return on the investment, that’s also a gain for you because the cash was kept in circulation and you didn’t have to hoard it at home.

How they go about it

Though officially you have lost money on your investment, you have got back all your money. Technically, because your account books show a loss, you pay no tax. Count that as your profit too.

Apart from the fact that you have turned a part of the black money into white, you also didn’t have to take the risk of hoarding the black money; it was kept in circulation.

Circulating black money is not easy and there are a lot of things that go on in the background. That is a complicated process but simply put, the film flopping at the box office doesn’t mean a loss for everybody because of the huge black cash flow it entails.

Though the film was meant to be a loss at the box office, the producer is a ‘hit’ with you. 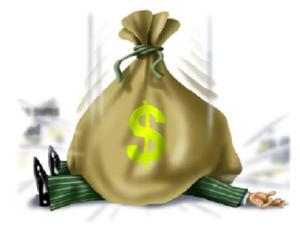 Why laundering black money in Bollywood is a good idea

Here is an expose done by Cobrapost and aired on CNN-IBN that exclusively focused on how black money is laundered in Bollywood.

The allegations of the sting operation were denied by the all the filmmakers when asked on camera. The above video also contains their vehement denials.