The failed Veena Malik and her third grade rant against India

By SOUMYADIPTA BANERJEE on July 7, 2017 • ( Leave a comment )
You will say that they are actors and when they are acting, they don’t represent a country. You will say they have come to India to do their job and they shouldn’t be held accountable for what their government is doing. You will say they are not supporting terrorism so they are being unnecessarily dragged into a controversy in which they aren’t a part in the first place.
You will say….
I was bombarded with these arguments when I urged Fawad Khan to condemn the terror attacks on India’s army perpetrated by the Pakistani proxies or leave India.
The bombardment largely came from my journalist friends from both sides of the border.
Meanwhile Fawad Khan released a statement urging everybody to ‘support peace’ and Mahira Khan admirably condemned terrorism in no uncertain terms.
None of them (or the other Pakistani actors who condemned terrorism) named Pakistan directly for the terror acts, which is understandable.
The whole fiasco also prompted me to connect more with my Pakistani friends who assured me with evidence that when it comes to Bollywood, most Pakistanis feel a sense of belonging.
We have numerous evidence from across the border where Pakistani actors have batted for Bollywood and have tried to convey the message that Bollywood has only enriched the lives of Pakistanis and not the other way around.
As my Pakistani friends tell me that there are two distinct lobbies in Pakistan — one that supports Bollywood (and most of them want to work here) and the other lobby who condemn India openly and urge their colleagues to shun the Indian film industry.

BUT there is only one actor who has been on both sides of the border and that person is Veena Malik.

Who Veena Malik? Well, she is an aspiring and struggling actor who has literally failed in everything she has tried her hands in. The only thing that she has gained so far, is notoriety.
She is in news because of a new television programme that she hosts on a Pakistani television channel.
In a recently aired television show in which she abused India’s Prime Minister. She abused in Narendra Modi in sweet Urdu words (because Veena Malik cannot speak a word of English unless she memorises it). 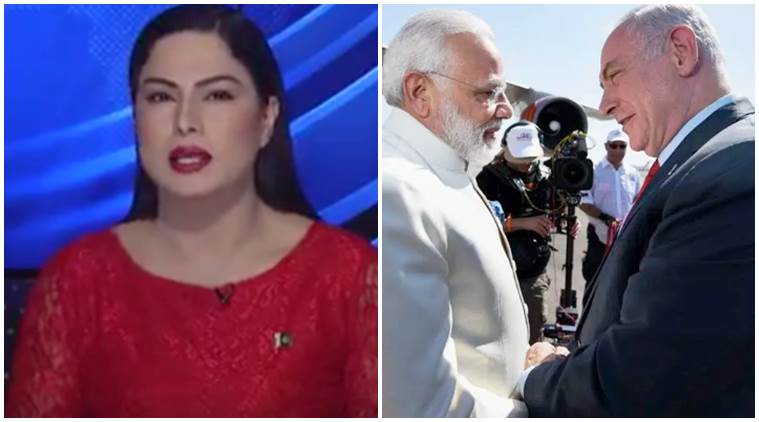 Some of the terms that she used to describe the Indian Prime Minister are Shaitan (Devil), Saanp (Snake), Khoon Ka Pyasa (Thirsty of blood), Zulmbaaz (Torturer) and Killer of Muslims (not using the Urdu word here).
Here is the video where she rants against the Indian Prime Minister Narendra Modi (and Israeli Prime Minister too). Warning: It might enrage you as an Indian.
She followed up that programme with another prime time TV slot where she ranted against the imaginary excesses allegedly committed by the Indian army in Kashmir.
The programme – like any project that features Veena Malik – was a flop again and not many tuned in to watch her mad antics (as my Pakistani friends tell me).
Yet Veena Malik continues to rant against India, the country where she dreamt of becoming a s big star and did everything so that she could become one.
She came to India to earn her bread, she earned hatred instead.
Why is Veena Malik ranting so much against India?

So why is this lady — who used to spam our mailboxes with press releases a few years back — is ranting so much against us? Why is it, that after exhausting all her options in Bollywood, Veena Malik is trying to spew venom back at us?
To understand that, we need to empathize with her, gauge where she stands now and how she is, as a person.
You see, Veena Malik suddenly vanished from India and landed up in Dubai to marry a Pakistani businessman called Asad Khattak. If we go by the press releases, then the initial days of her marriage were good. The couple also have two minor children, both boys.
The only blip during these years is perhaps a blasphemy charge against her and her husband filed at a Pakistani court for circulating a clip of her own wedding video. In the case, she was found guilty and sentenced to 26 years in jail. Thankfully the ruling came from a court that doesn’t have authority over whole Pakistan but only a particular province.
If you look up Veena Malik’s interactions with the media, she has always spewed venom — whether it is against her own family, against her Indian colleagues or against Bollywood in general.
Her father Malik Mohammad Aslam has publicly disowned her.
When she came to Pakistan seeking a divorce against her husband, she said that her husband didn’t have enough money and that she was told of a different story about his financial status.
She also said that her husband didn’t want to support her comeback into the media and urged her to look after her own children instead who are babies.
Here is the video where Veena Malik is ranting (as usual) against her ex-husband.
So, where does Veena Malik stand now?
She is back in Pakistan which is known to be a dangerous country for single women. She doesn’t have any ties with most of her family members because they have long abandoned her.
She has two small children (She is still seeking custody) and she needs to have enough means to support them. She has no job as an actress in the Lahore Film Industry where she is a persona non grata.

So, what does she do to earn her bread? Yes, spit in the same plate that once served her biryani once.

Veena Malik is ranting against India because she is desperate for money to bring food on the table. She is on the edge with cases pending against her and battling a nasty divorce. She needs people to notice her and support her.
Thanks to a Pakistani TV channel, some people (including us) have noticed her for sure.
But sadly when it comes to support, I can assure you that she is having none of it — whether it is on this side of the border or that side.
The only support she has, is perhaps, from the ever dwindling number of religious and political hardliners.
It only proves what we stated earlier….
Whatever she touches turns into ‘loser’.