The shameless stalking of Suhana Khan

It all started with a photo on Instagram. It showed Suhana Khan in a green swimsuit posing awkwardly along with her baby brother on the beach.

Within seconds, the mainstream media was filled with those pictures, begging their audience to have a look at her ‘body’. I am not using the word ‘body’ myself but this is how a large number of websites decided to describe and caption that picture.

The viral nature of the photo soon attracted the attention of SRK’s staff who immediately circulated a mail requesting the media to pull down the photo. The mail also reminded the web editors that Suhana is underage and a minor.

Most web editors immediately realised their mistake and pulled the photo down. But some editors (including a few reputed media houses) didn’t pay heed to the mail and the photo is still up on their webpage, where it continues to draw hits if you search with the right keywords.

That was just the beginning of yet another downfall of the Bollywood mainstream media and they are free-falling as I write this article because they have discovered that the name ‘Suhana Khan’ is great as click-bait.

A few months back (during the last week of March 2017), a prominent media house put up this collection of photos with this stupid headline (picture below, on the right). But this time, Twitter acted as a force and attacked the media house for putting up the photos with a derogatory headline like that.

The media house reacted by just changing the headline.

Here is the original post and (on the left) the changed headline. 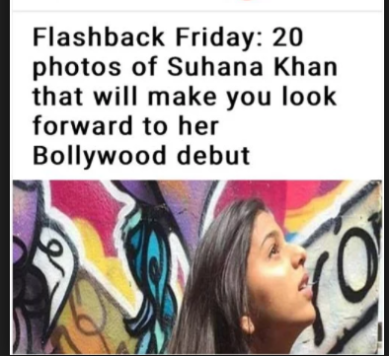 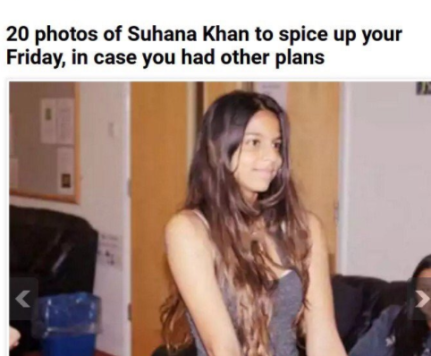 However, what happened in the basement of a movie theatre beats all senses of professionalism, propriety and reason.

A group of paparazzi photographers hounded and chased Suhana down as she prepared to get into the lift from the parking lot. She increasingly grew uncomfortable as the cameras inched closer.

She tried turning around, she tried moving her face away… she tried every trick she could think of, but the cameramen continued with their ‘work’.

These guys kept on shooting and clicking, even as Suhana entered the lift.

Check the video below and you will understand how things panned out.

Nobody in their right senses would feel that there is any bit of professionalism involved in this.

I have spoken to one of these cameramen and they say that they click such pictures and videos because media houses buy them and some even pay a good price.

This incident too reached the Khan household.

Shah Rukh Khan reacted to the incident strongly but he sounded more like a helpless dad who can only request the media with folded hands to not stalk his teenage daughter.

Here is his reaction below.

Suhana is just 16 years old and we are stalking her like a bunch of perverts. More so, we are quite shameless about it.

I am also convinced that the editors who are allowing this content to rest on their websites are actually perverts posing as senior journalists.