Now, is that Mr Kawas Nanavati? No, no, it’s a super-duper man. Neither a biopic nor a convincing thriller, sorry to say, here’s a disappointment. Sure, the first half does yield some stray engrossing moments, but that’s about it. Intermission done, and you’re trapped in an unintentionally tedious courtroom fest where the judge is as confused as the viewer, yelling out, “Order! Order!”

In fact, the disorder aka Rustom, directed by Tinu Suresh Desai and produced by Neeraj Pandey, connects with you essentially in its recreation (however veiled it may be) of the sensational 1959 Nanavati case.

For those who came in extremely late, Naval Commander Kawas Manekshaw Nanavati had shot dead Prem Ahuja who was involved in a clandestine affair with the commander’s wife Sylvia. Around 1963, the Sunil Dutt-Leela Naidu-Rehman black-and-white film Yeh Raste Hain Pyaar Ke, had attempted a take on the cause celebre which had rocked the nation.

Indeed, the basic material would seem to be perfect to rekindle the curiosity of today’s audience. Alas, the fact-and-fiction mash-up as written by Vipul Rawal and helmed by Desai, is a clear case of missed opportunities. 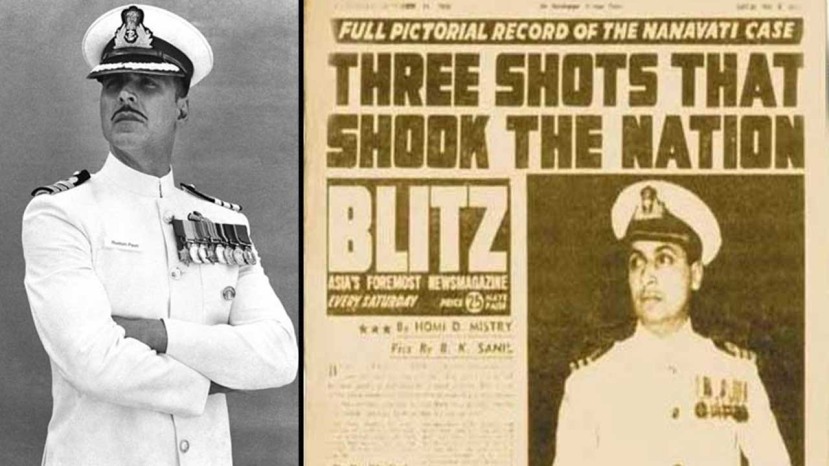 Like it or not, the Parsi milieu as well as the period ambience – except for token touches like cars and a rickety train — don’t ring true at all. Nanavati renamed Rustom ‘Rusi’ Pavri (Akshay Kumar) never ever lapses into a smattering of Parsi Gujarati either, his home décor is made up of what looks like faux furniture and props on hire. If he has any neighbours or relatives, they have obviously vanished into thin air. Poof!

More irksomely, a tabloid’s editor (Kumud Mishra, hopelessly miscast), obviously ‘inspired’ by R.K. Karanjia of Blitz, comes off a down market joker, when in actual fact the editor was as elegant as they come. Ah, but they who cares about authenticity, or dare one say, the Machiavellian stealth of editor Karanjia?

The Nanavatis had three kids. Rustom and his wife Cynthia (Ileana D’Cruz, unredeemingly lifeless) have none, perhaps to avoid the already cluttered scenario.

As for ‘Playboy’ Prem and his sister Mamie, they’re replaced by Vikram Makhija (Arjan Bajwa, serviceable) and Sister Makhija (Esha Gupta). Sisterji is especially hilarious, constantly sucking away at a kilometer-long cigarette-holder to assert that she’s a bad girl. Only baddies smoke, you see. And oh yes, don’t miss sister’s hair style which goes one-up on Dev Anand’s puff. The Makhija siblings specialise in looking as snug-as-bugs-in-a-rug. Uff.

And the courtroom hi-jinks which erupt are to be seen to be disbelieved. Forget that irate judge, there’s a jury on the scene too (the Nanavati case was the last of its kind). Truly, the jury members should have been given coaching classes to control their expressions which range from A to B, shocked and more shocked.

Following the Bollywood brand of derring-do, apro Rustom defends himself in court and he’s opposed by an “Objection my lord” machine (Sachin Khedekar) who inadvertently exudes comic relief. Ditto a domestic servant ‘bai’ who dares to ask the judge what he would have done if his wife had indulged in a spot of adultery? Cut, the poor bai is flung into prison.

The editing strives to be clear but isn’t (note the obtrusive cuts from one face to another being interrogated by the police). As for the music score, there’s nothing to sing and dance about here. Santosh Thundiyil’s cinematography suffers from terrible colour grading, often making Ileana D’Cruz seem as if she broken into a flaming red spots on her face.

Spoiler alert prevents me from hinting at the incredible twist towards the finale. Check it out if you must for yourself.

Of the cast, Pawan Malhotra as the investigation police officer is impressive. So is Akshay Kumar’s fervour to step off the beaten track. He exudes sincerity and polish. The rest of Rustom doesn’t.

Original Link of the Review