It’s a botched up job. A sister act tapped from real-life – an addition to the farm of mushrooming biopics – leaves you howling with disappointment.

In fact, Omung Kumar’s Sarbjit, stands out as an acrid, hardboiled melodrama, full of sound and fury signifying nothing. And the blame has to be shared in equal proportions by the director’s ‘Bollywoodisation’ of a poignant story, Utkarshini Vashishtha’s incohesive screenplay which keeps leapfrogging from one sequence to another and a shrill background score.

Alas there’s the miscasting of Aishwarya Rai-Bachchan, too, whose age is shown to advance with the mandatory 500 shades of grey hair and a pair of specs which dear ol’ Jeetendra used to wear in the vintage Gulzar movies whenever he had to exude an air of gravitas.

In the vein of his Mary Kom, Omung Kumar zooms in on a narrative – about a woman’s 23-year-long struggle to seek justice for her incarcerated brother in Pakistan – which surely needs to be seen and heard. However, he seems to lack the nerve to dispense with formulaic conventions. Instead, he flaunts an overwrought style and a tendency to hip hop without ever going deep into the subject, which demanded an understanding of Indo-Pak politics, the dialectics of public protest, legal complexities and above all, seamless storytelling. 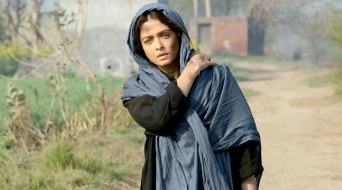 Result: you get a shallow account of Dalbir Kaur (Rai Bachchan), whose brother Sarabjit Singh (Randeep Hooda), was accused of terrorism and espionage, linked to bomb blasts in Lahore and Faisalabad. Notionally, circa 1990, the accused in the throes of a drunken stupor, had mistakenly strayed across the border. Quite naturally his family back home in Punjab was plunged into dire straits. Fortuitously, the sister’s made of sterner stuff. She won’t allow injustice, and fought for more than two decades to get her voice heard.

Snag: this saga of a woman’s fortitude called for a balanced reportorial stance (as evidenced in Neerja), entailing a certain stealth, realism and the recreation of facts from its myriad angles. In lieu, you gasp on being subjected to a flashback of a splashy song-and-dance number performed on Sarabjit’s wedding day. After all if it’s Punjab, a band baaja baarat is as essential as a dollop of ghee on aloo parathas.

Once imprisoned, Sarabjit undergoes high anguish, most of his scenes being located within four walls. Since his plight cannot be sustained for too long, the focus shifts gear to the rescue campaign initiated by the sister, which translates into fire and brimstone speeches, the incorporation of pseudo-nationalism and a toss away reference to a phone call from an international NGO. Continuity and credibility go for a toss, what with the financially stressed sister commuting between India and Pakistan as if she were merely popping over to a nearby mohalla.

The end is already known. Sarabjit didn’t survive, murdered as he was by fellow inmates in a Lahore jail. To wrap up, the film informs you that there are many who have been lingering in jails both in India and in Pakistan, the implication being that their cases should be reviewed. Food for thought, yes. But it begs the question, are all such prisoners being held for minor trespasses? Ergo, the film confuses more issues than it raises.

On the plus side, Kiran Deohans’ cinematography and the production design are first-rate.

Unconditionally, two thumbs up are due to Randeep Hooda for an implosively powerful performance. Vaulting over the dramaturgy’s deficiencies, he transmits his haplessness effectively. Richa Chadda, as his wife, is remarkably resilient, correctly communicating slivers of resentment with her eye language.

Doubtlessly, the fact that Aishwarya Rai Bachchan has opted for the down-to-earth mode (earlier efforts include Jag Mundhra’s Provoked and Rituparno Ghosh’s Raincoat and Chokher Bali) is commendable. Her performance less so. Throughout, her voice modulation and diction leave a lot to be desired. Those jabs at rousing speeches are an ear-sore.

Come to think of it, it is tempting to imagine Vidya Balan, an expert at a range of dictions and emotive strength, in the part of Dalbir Kaur.

Upshot: the reality-hurts material is outstanding. In execution though, the portrait of a Sister Courage come across as a random draft in a sketch book.

Original link of the review