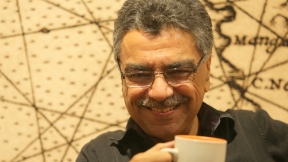 Whenever it rains, she forgets all her pains. No fret. Speaking out loud to the non-existent clouds, she lurves to get wet till scared, you want to summon a doctor just in case she catches pneumonia. Fortunately, instead this girl catches loveria, better known as the love bug. Follow a thousand hugs.

How come? Because there’s this muscular dude who’s also mad about the monsoon. Quite a damp Jack and Jill jodi this. They could fill up a gazillion buckets of water for Baaghi: A Rebel of Love, directed by Sabbir Khan for producer Sajid Nadiadwala.

By the way, apart from singin’ in the rain, they have miles of combats, kick-buttin’, skull smashin’ and gun slingin’ to go before they sleep. Truly, the script could have been written on half a sheet of foolscap paper. As for logic and continuity, those elements are thinner than a wafer.

Although charged of being cogged from the Indonesian flick Raid: The Redemption, Baaghi: A Rebel of Whatever, has such a wispy plot that it’s like an exercise in connecting a series of dots. Love blooms, a bad bozo zoom-barabar-zooms, imminent doom looms, till you’re convinced that practically every humanoid on the scene is about to be entombed. Honest.

Wait a minute, though. For those whose goblet of poison happens to be action of the fractured-bones variety – at one point even X-Rays of decapitated spines are shown – the jousts-n-bouts are pretty extraordinary till the screen flashes the Intermission logo. Oh oh. 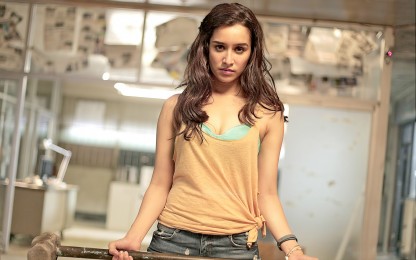 That a majority of our films split as easily as watermelons into two halves — one edible, the other not – indicates the reason why Bollywood can’t match up to the slick standards of international and even South Asian thrillers. Expectedly, then, after an hour or so of the kiss-kiss-kill-kill stuff, the rest of this baggy 140-minuter lapses into chaos, what with the body count rising as it would in a refuelled gas chamber. Uff the uff.

To be fair, the film’s early sequences do have you hooked. Located against the chlorophyll green ambience of Kerala, the momentum rises when you enter a school devoted to Kalaripayattu – a 14th century form of martial arts which the dialogue stresses was the forerunner of China’s Shaolin kung-fu. The school’s guru takes it upon himself to train Dude Jack (Tiger Shroff), who has the lord alone knows how many abs, but is far too coltish and a beer guzzler for comfort. Hic!

Danger ahead: Jack who adores the baarishwalli Jill (Shraddha Kapoor) is detested at first sight by the guru’s gargoyle of a son (Sudheer Babu, impressively menacing). Gargoyle, you see, also wants to stroll up the hill with Jill, which is why everyone’s life goes pell mell.

To add to the clutter, there’s a busful of characters ranging from Jill’s virtual pimp of a father (Creepy Crawly), a mute child who keeps droning “Yaaas Yaaas”, a granny who brews tea in silver mugs (is she alright?), a caricatured South Indian film producer, not to forget hundreds of henchmen taller than the Big Ben.

In the event, it’s best to go Zen and just watch a Kerala boat race and the Kalaripayattu feats, which are done well. 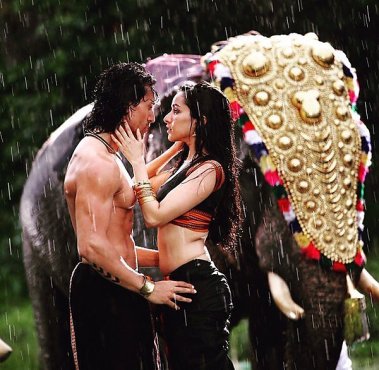 Not quite confident that the Kerala backdrop is commercially viable, the Baaghi unit flies off to Bangkok. Jill, you’re informed, has been girl-napped by that Gargoyle. Next: so our Action Jackson must also jet to Thailand and make it Massacre Land.

For comic relief, Jack-o recruits the services of an Indian taxi driver (over-the-top irritant) who’s blinder than a bat. If it’s in bad taste to extract laughter out of the visually impaired, obviously the director and producer couldn’t care less. Ensues a mega-mess.

Mercifully, this cliché-littered actioner isn’t entirely dismissable. Tiger Shroff does have a likeably boyish appeal, besides being super adept in the stunt-baazi. Shraddha Kapoor’s strength is her spontaneity. Her weakness is evident in her dance moves. In the course of a wet-dance at a railway station, she breaks into a leg break which might have looked better on a cricket field.

On the tech front, Binod Pradhan’s cinematography is an asset. The editing, the music and background score just about make the professional cut.

Incidentally, Sajid Nadiadwala seems to be quite impressed with the film’s title. Coincidentally, the same title with the caption A Rebel for Love had been used for Salman Khan’s exploits way back in 1990. Just goes to show that when it comes to ideas, our filmmakers are no revolutionaries, are they?

Psst: The extra half star up there is for the vistas and martial arts vigour of Kerala.

The review was originally published HERE

Categories: Bollywood, Is the movie worth your buck?