The only country where the film has worked, is interestingly, in Pakistan.

The overall results of the film are kind of unbelievable for an ardent Shah Rukh Khan fan.

I am sure at Yashraj, everybody will do a bit of post mortem on where the film went wrong. You never know if (director) Maneesh Sharma is also looking for answers on why such a well-made film – which garnered such rave reviews from the harshest and the most ‘intellectual’ of critics – floundered at the box office.

Not only did it flounder, it dipped so badly after a great opening that many might find it alarming, because it starred one of the most bankable stars of Bollywood.

So, why did this disaster happen?

There are certain things that are starkly visible to the viewers which might not be apparent to the makers. You tend to be blind to a creation if you are the creator. I guess this is what happened in this case.

Here’s my take on the flaws of Fan that have disappointed its viewers. And no, I won’t be talking about release dates and market economy. I am going to concentrate solely on the film’s content.

Too many changes to the character sketch of Gaurav Chandna

That many creative ‘inputs’ have gone into the script, are evident after a few scenes. Gaurav Chandna is not behaving consistently in the film. His persona changes as the film progresses. 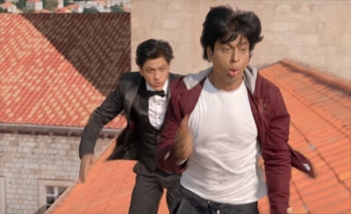 For example, he appears very clumsy in the first half of the film and by the second half, he is a super conman who is capable of executing body moves like a James Bond.

The way, Gaurav is fooling entire units of security and scaling walls and jumping into the raging sea, can’t be associated to the Gaurav who can’t even fend off a few goons from his cyber cafe in the first half of the film.

The dialogue delivery of this character is full of inconsistencies. Also, he doesn’t maintain the swagger in his walk.

This list is endless but hopefully, I have made my point. This happens when there’s too much work done on a character’s looks and not how the character is coming out on screen.

While minute details have been paid to every muscle on Gaurav’s face, we have conveniently forgotten that the character is supposed to behave like a human being. The drastic changes in the character of Gaurav Chandna sticks out like a sore thumb.

Somewhere in the middle of the film, Aryan Khanna fully turns into ‎Shah Rukh Khan. Not only does this character inherit the bungalow, awards and brand Shah Rukh Khan, he gradually transforms into Shah Rukh Khan himself.

People who have read about Shah Rukh in the film mags will forget that they are watching Aryan Khanna and will start referring the character as SRK. Check the tweets about the film and this becomes starkly evident.

I am sure that was not the intention. Had that been the case, then Aryan Khanna would have been named Shah Rukh Khan in the film. Since it was not done, we can safely assume that it was meant to be a character which will have little similarities with SRK.

Even SRK has mentioned that in his interviews while he was promoting the film.

Unfortunately, the character spoke, walked and behaved like SRK.

What’s more? The character even mouthed the dialogues what SRK would deliver in real life. For example, what he frequently says about being an essentially Delhi guy when he gets angry. Everybody knows that SRK boasts of the aggressiveness that the city of Delhi has bequeathed to him.

This is the reason, the film was looking like an extended PR exercise of Shah Rukh Khan after a point. This was pointed out by another writer some days back.

I don’t think I need to labour on this point further, anybody who has seen the film will know what I am talking about.

Harsh treatment meted out to a fan

You start the film by showing the fan to be a human being and then you take off on a different tangent by portraying him as an obsessed criminal. People get confused whether they should side with the hero or the villain. Hence, the audience start getting distant.

Now, the hero’s treatment of his fan will gross any fan out.

Gaurav assaulted Aryan’s fiercest rival because he couldn’t stand anybody speaking ill of his idol. He also made a video (of the assault) on his phone and anonymously circulated it on social media.

The ‘rival’ hero who got beaten up in his own vanity van kept quiet about it and decided not to go to the police. So, naturally he forgave this obsessed fan of Aryan Khanna.

Now, the fan trusted his hero and privately circulated the behind-the-scenes video to boast of his achievement to his idol. The idol immediately reacted to it adversely because it was ‘wrong’. So, how did he set things right? He got the fan locked up and beaten up mercilessly without a FIR or proper legal procedure.

On one hand, when the idol lectures him on what is right and what is wrong, on the other, he has no qualms in putting him under illegal detention, manipulating police officers and even going to the extent of getting him tortured inside a lockup!

Now, what was that, Aryan Khanna? 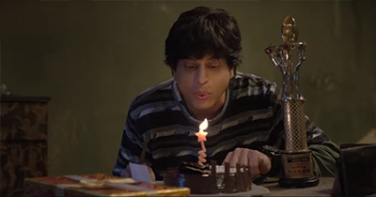 As a hero, you could have lodged a police complaint. How could you let your own fan get beaten up so mercilessly inside a police station?

You didn’t stop there, dear Aryan Khanna. You boasted about it to the fan (while he was still reeling under acute pain inside the lock-up) and then you asked the police to get the fan on a return train to Delhi.

This will put any fan off.

And to my belief, they were put off when the fan started going from dark to darker territories.

I fail to understand why didn’t this get modified at the scripting stage.

The hero was shown to be a hero but he was behaving like a villain. The villain was supposed to be a human being but he turned out to be a superhero with some human qualities.

The whole characterization turned out to be chaotic.

I think this happened because a lot of effort went into getting the look of Gaurav right. Surely, it was very important but the over indulgence eclipsed the most important aspect of filmmaking — storytelling.

Somewhere down the line, the script of Fan was not right.

It looked to me as if there were too many changes introduced to it later.

Whether this is true or not, we will never know.