In defence of Kangana Ranaut

After Kangana gained some initial public sympathy, the odds in the second round seem to be heavily stacked against her.

A lot is being written about Kangana Ranaut’s non-cooperation with the Mumbai Police and the fact that she has not submitted her laptop to the Cyber Crime Cell for examination after she was named a witness by Hrithik Roshan in an FIR pertaining to an imposter operating an email account in his name.

I recently read an article that pronounced Hrithik Roshan “Not Guilty” even before the police have completed their investigations.

That unsettled me a bit.

I don’t know Kangana Ranaut personally, neither am I aware who her PR is, so I decided to find out myself why is Kangana behaving this way. I also tried to find out why is she not cooperating with the police and bringing an immediate closure to this case when apparently, she is capable of doing so.

I called up a friend of mine in the police (might be the same police officer who meets journalists at parties) and asked him what exactly has happened and whether he feels Kangana Ranaut is cooking up a story just to malign Hrithik Roshan.

The police officer, surprisingly, told me that he doesn’t think Kangana is lying. He said there’s no motive as Kangana is unlikely to gain anything if she goes against Hrithik Roshan publicly. So, there are must be some deeper reasons why Kangana is not depositing her laptop with the police (yes that is what she is supposed to do).

Well, what I independently found out, is quite different from what is doing the rounds.

Since everybody has stopped defending Kangana Ranaut, here’s my defence against the article that squarely pronounced Hrithik Roshan not guilty. 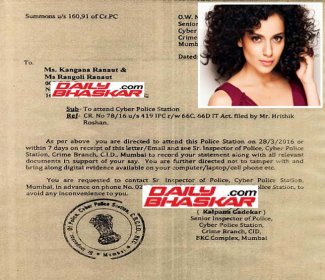 A copy of the police summons. Courtesy: Daily Bhaskar

Kangana Ranaut was ‘directed’ by the police to come in person with her laptop and depose before the investigating officer. This was duly reported in dailies.

Apart from the fact that Kangana and her staff were stunned by the way the letter was worded, can you think about a situation where a leading Bollywood actress presents herself in person at the police station as a witness, laptop in hand?

Just for the record here is the text of the email that was sent by the police….

You are hereby directed to attend this police station on March 28 or within seven days on receipt of this letter/email and see senior inspector of Police, Cyber Police station, Crime Branch, Mumbai to record your statement along with all relevant documents in support of your say. You are further directed not to tamper with and bring along digital evidence available on your computer/laptop/cell phone etc.

When her lawyer objected, a fresh e-mail was sent on April 1 by a senior police inspector. This new email more or less sounded like a request from the police. So far so good.

Do you know calling a woman to the police station to depose (unless she willingly does it) is against the law? Kangana’s lawyer issued a statement regarding the same stating that summoning a woman to depose under section 160 of CRPC (which deals with witnesses) is not legal.

Now if you are woman, imagine yourself in Kangana’s position. Wouldn’t you think that the police is acting on behalf of the complainant (that is Hrithik Roshan) and not sparing a thought for the victim (Kangana Ranaut)? Will she wrong to think that the evidence (she will provide) might be used against her?

Now, I will proceed to debunk every point in the article with inputs provided by my own sources. It’s all sources versus sources here, you see 🙂

Hrithik Roshan, in his statement to the police, said that he hasn’t communicated electronically with Kangana at all. So, as per his official statement, he should not be aware of the numbers of emails or texts sent by Kangana to the imposter. By his own admission, Mr Roshan is completely unaware of its contents. The contents of those mails are only and exclusively known to Kangana.

As per reports, there were communications made by Kangana to his real email ID also.

According to reports, Mr Roshan in his complaint, has claimed he gave Kangana his real email ID at a party hosted by Karan Johar. Thereafter, it is alleged, that she started spamming him with mails, photos and videos. He has expressed concerns that some of the photos might be explicit.

Mr Roshan sticks to the point of not answering any of the mails. Which means, he basically made no attempt to block her or even communicate it to her (by sending an email or otherwise) that he is being spammed.

If I knew a lady personally and have acted with her in two films, I wouldn’t have done that. I would have made things clear to her on mail or on phone (or even through my staff) and not waited for hundreds of emails to spam my mail box.

I find that abnormal behaviour. Perhaps others might not.

To put things into perspective, Kangana’s lawyer has accused Hrithik Roshan of hacking into her account and deleting the emails sent by Hrithik Roshan.

HERE ARE the latest developments of the case neatly listed for you.

Kangana Ranaut should have ideally convinced Hrithik to park his car outside her home to prove that they were having an affair. If that has not happened, then he is not guilty?

Regarding meeting her socially and never ever clicking pictures with her, I am sure the archives of every media house tell a different story.

Even during media interactions leading to the release of Krish3, it never seemed that Hrithik was uncomfortable with her (On your right, is a picture from one such promotional event).

If I had been Hrithik Roshan, I would have, perhaps, chucked Kangana out from the movie or even its promotions, if I found out that she behaving erratically.

That too has not happened.

It is still being investigated why this ‘fantasy’ lingered on for so long without any corrective steps from anybody.

Okay, now we come to the main topic of conflicting claims and statements. But before that, we need to suspend our common sense just as we do in case of some Bollywood movies.

First, we need to accept the fact that if we know somebody very well and personally, an unknown person will be easily able to impersonate him on email.

Imagine you have a friend with whom you have interacted very closely. As per the details of this case, this is possible that you will never have a speck of doubt if an unknown person sends emails impersonating your friend. In fact, that unknown person can actually fool you to exchange your intimate photos.

The only other possible explanation is that Kangana is lying. Sorry, nobody has directly said that.

What has been directly said by Hrithik Roshan is that the email ID hroshan@email.com doesn’t belong to him. Fair enough. This is the subject matter of investigation and Hrithik’s claims haven’t been proven to be correct just as yet.

So far, we know that the email ID has been traced to the US. This is a no brainer because the servers of email.com are in the US. The IP address used for the mails haven’t been traced so far.

Kangana’s side, on the other hand, has claimed that Hrithik had opened a new email account to correspond with Kangana, a charge vehemently denied by Hrithik.

The imposter, whoever it is, hasn’t chosen to leak any of the photos or the videos sent to him by Kangana even though he could have made money out of those. So, we are talking about an imposter with a good heart here. This imposter is the rarest of the rare imposters on the internet.

It was very nice of Hrithik to have kept quiet for the longest time when he was receiving those mails. There was no interaction from him even though he was getting spammed. Suddenly a gossip article in a newspaper (where he was not named) provokes a legal notice. As things stand now, Kangana is named as a witness in a FIR.

Would you call it keeping quiet? I wouldn’t.

I am thinking that Kangana is such a fool that she didn’t realise that she is continuously sending mails and messages to a person who is not responding at all? Would you do that? Hundreds of mails – one mail every six minutes from morning till night – without a single answer?

I have never heard anybody send so many mails without a response.

The moot point is, there are claims and there are counter claims. If you try to find holes in Kangana’s accounts then there are holes on Hrithik’s side too.

The case is now being investigated by the police and the matter will soon go to court as the police will file its case report.

Why can’t we wait for the police to file its report or the court to pronounce the judgement?

What’s the tearing hurry to place the blame squarely on Kangana’s shoulders?