Om Puri: A part of my identity will be lost forever 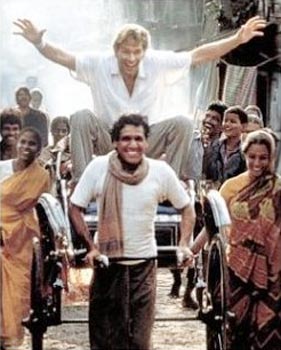 Om Puri in the film ‘City of Joy’

I don’t think I am happy after hearing this news that Kolkata is about to ban hand-pulled rickshaws. In fact, this made me sad.

Kolkata will lose a part of its identity if they are made to go like that. Kolkata will never be the same. I will lose a part of myself too.
I hope people remember that I had played a rickshaw-puller in the film, City of Joy. The role had become a part of my identity today. I have many friends among them (rickshaw pullers in Kolkata) as I had stayed with them for months while researching about the film. In fact, I have many friends among them.
I can tell you that it is not about banning hand-pulled rickshaws but about denying hundreds of their legitimate livelihood. Where will these people go? How will they earn their livelihood? I don’t support banning of hand pulled rickshaws.
Yes, I have heard about the ‘package’ that the government is providing them. I will come to that later. Let me first talk about the legality of making a man pull another man’s weight which I beleive is the reason why they are being forced to leave the streets of the City of Joy.
I can’t understand how pedalling a rickshaw is legal and pulling a rickshaw is not? Isn’t it equally cruel to make a man pedal a rickshaw the whole day? If you are banning hand-pulled rickshaws, why aren’t you banning cycle rickshaws as well?
In both cases, a man is pulling the weight of another man. How come pedalling a rickshaw is legal in Kolkata and pulling a rickshaw is illegal? Why doesn’t the government let it remain as a tourist attraction and not force them out of business?
Let us now talk about the alternative package of livelihood that is being provided to them by the state government. You see, a soft loan is not always a viable alternative. You cannot take their livelihood away and tell them, ‘Here, take a bank loan. I am giving you a preferrred rate of interest’. You cannot also tell them, ‘Go buy a auto-rickshaw’.
It is forcing them into something they might not be ready for. Rehabilitation is ensuring that they earn a proper source of livelihood wilingly and not because they have no options in front of them.
Tomorrow, when they will bring out their rickshwas, they will be told that their vehicles are illegal. If they still decide to ply it, they will be fined or worse, they might be arrested.
When you take away their vehicles away from them, look closely into their eyes, you will see an Om Puri into each of their eyes. So desperate, so weary, but not tired. The eyes plead but they do not beg. The eyes are full of humility but they do not ask for favours. The eyes are full of life but they speak a story of sadness. The eyes of full of life yet they speak the language of darkness.
That is my dear friend, the essence of the rickshawalas of the city of joy.

A rickshaw puller takes a quick nap. Photo by Sirsendu Gayen in Kolkata.

I request the West Bengal government to ensure that proper rehabilitation is granted to these rickshaw pullers. If you take away their rickshaws, you are taking away their livelihood. Most of these people are here because they don’t have anything to do otherwise to earn their bread. You cannot take away somebody’s livelihood just like that.

The government sometimes does things very easily. All they do is to pass an ordinance or a legislation through a voice vote. It’s all in a day’s work and next day they move on to some other legislation. But spare a thought for the rickshawalas.
For once, let us move away from the rickshwalas, why don’t we talk about your grandparents? I belong to that age today.
We are old and we are infirm. We stay in north Kolkata. We stay in narrow lanes which get flooded every monsoon. We stay where no vehicle can enter and can only be treaded by the local rickshawallah. He picks me up with so much care, wades through the knee-deep waters and ensures that I land up safely at my door. You call them choukath in Bengali, isn’t it?
Tell me which vehicle is there that will wade through knee deep waters during the floods and help me reach home? Tell me which rickshaw will lovingly sound those bells as they carry my frail old-age weight around?
Tell me when you take those rickshaws away from me, aren’t you taking away my freedom to move? Will you now ask me to stay home when the monsoon floods my street?
When they take the hand-pulled rickshaws away, won’t they take a part of my childhood away? I played along the lanes of the north Kolkata and now you just see them go away? You call that going forward? I don’t.
I think an age will go by without us realising it that we are losing a part of our heritage. We are losing a part of our Kolkata. I can no longer go back and see how my friends are doing in Kolkata.
The Kolkata’s hand-pulled rickshaws contributed towards making an Om Puri that he is today. I became a rickshawallah for a few years just because I knew that I am one of them.
Sadly, that Om Puri will be lost in the pages of history.
Sorry, I got emotional but somewhere down the line there’s a feeling of emptiness when you say that you will be taking handrickshas away from me.
Somewhere down there, there is hope that those men will find more dignity of labour. More smiles. More Cheer. More Joy.
After all the city is of full joy.
This reaction was given by Om Puri over the phone after we informed that hand-pulled rickshaws are being banned from the streets of Kolkata. He already knew about it. His reactions have been transcribed by our staff.
We have just corrected a few phrases and grammar for better clarity. We haven’t changed his words to convey another meaning.
The photo of the rickshaw puller is taken from this blog and has been clicked by Sirsendu Gayen from Kolkata, West Bengal. The author’s URL can be viewed here.
The blog’s cover picture has been taken from HERE. The photo has been clicked by Ayan Khasnabis. The story behind the photo can be read HERE.