A love story on Durga Puja

Nilanjanaa (second from right) in the serial Hip Hip Hurray

Nilanjanaa Bhowmick (daughter of Bengali actress Anjana Bhowmick) had just come down to Kolkata from Mumbai after a successful stint in the TV series Hip Hip Hurray.

She was in Kolkata to act in her first Bengali film Swapner Feriwala.

From the moment Nilanjanaa landed in Kolkata, the pretty actress won many hearts but at that time she had no clue that she would be making her way into the heart of the handsome and popular Jisshu Sengupta as well.

Today, Jisshu might be riding high on the success of Bollywood films like Mardaani, Barfi and Last Lear but back then (in 2002), he was no less popular in the film and television industry of Bengal.

Their romance took off during the Durga Puja of 2002 – Nilanjanaa also ratified this when I asked her about it recently – and instantly became the talk of the town.

“It all happened on Ashtami,” said Nilanjanaa, adding, “The defining moment came that day.”

The Times of India organized Pujo Barir Shera Pujo, a competition amongst apartment building pujas in Kolkata. On the day of Ashtami, the third day of Durga Puja, celebrity judges went to the short-listed venues and did the final judging.

In 2002, Nilanjanaa and Jisshu were among the celebrity judges. After the judging rounds were over, lunch was at the Oberoi Grand thereafter.

Nilanjanaa and Jisshu were sitting at the same table and stealing glances at each other.

Every time Jisshu looked at her, I could see her blushing. The magnetic attraction between the two of them was palpable but I also knew for a fact that both had not yet declared their feelings to each other. 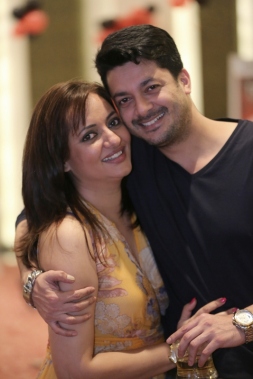 Jisshu and Nilanjanaa in 2014. Picture by Rana Basu Thakur

Lunch got over and we were standing at the lobby of the hotel when Jisshu, with his trademark sense of humour, did something to me.

A family leaving the hotel spotted the two actors and asked for their autographs. Jisshu obliged and then turned towards me and told them, “You should take her autograph too she is a big star in South Indian films.”

While the autograph hunters were desperately trying to recognize me I was looking for a pillar to hide behind. Everyone else standing there was in peals.

Jisshu now suddenly turned his attention to Nilanjanaa. As the valet brought his car out, he told her, “I will drop you.”

Before she got a chance to say anything, the car had come and Jisshu was at the wheel waiting for Nilanjanaa to step in.

Sometimes I feel Jisshu and Nilanjanaa were destined to be together. While we at the media loved to pair them for photo shoots, interviews and events, directors and producers felt the same when it came to pairing them on screen for tele-films and films.

As the two worked together, love blossomed on the sets and then one fine day as abruptly as Jisshu had insisted on dropping Nilanjanaa home on Ashtami, he walked into her house at 10 pm and asked her mother for her hand.

Since then the hottest couple of Tollywood have been spending Durga Puja together every year.

Only difference is they now spend it with their two beautiful daughters Saara and Zaara.

The couple is happily married for 10 years now.