In the heat of the moment

Bollywood is a place where you create a make-believe world. But there are instances when Bollywood actors subject themselves to sheer torture in its name.

A few days back, I was invited on the sets of Dibakar Banerjee’s film Detective Byomkesh Bakshi, which stars Sushant Singh Rajput in the title role.

It was the last day of shooting and the director, before wrapping up the final day’s shoot had invited a select media group to catch him and Sushant Singh Rajput in action.

This was unthinkable 10 years back — media was completely barred from the sets when a reputed director was at work. Today, these on-the-set visits have become a norm but, that is another story.

Everybody was busy clicking in a mindless frenzy on the sets, that’s when I found a strange subject in Sushant, who was almost looking like the long-lost brother of Arvind Kejriwal in his Byomkesh Bakshi costume.

During the first week of this month (May, 2014), the temperature in Mumbai was disconcertingly high — hovering around 38 degrees (Celsius); working in that heat (coupled with the humidity) was near impossible. Most journalists and sales-people I knew— whose job involves being out on the field — preferred staying put in their air-conditioned offices. 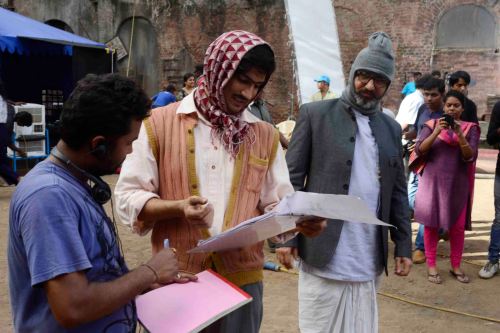 And in that heat, Sushant Singh Rajput was seen wearing an acrylic Punjabi suit, muffler and sweater. If this was not enough, Sushant had to wear the muffler around his head like Arvind Kejriwal.

“The script demands this. We are shooting a scene during December and according to the script, the temperature is around 10 degrees. This is how my characters used to dress during acute winters in Bengal,” said Dibakar, while wiping the sweat of his brow with a gamchha that was hanging around his neck in typical Uttar Pradesh bhaiyya style. 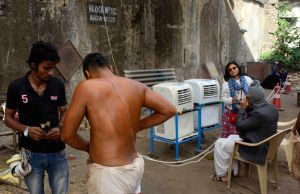 Of course, Sushant was getting soaked in sweat while working. To give him some respite, Dibakar had installed two big air-coolers for him on the sets. But from the looks of it, the coolers were not helping the actors much.

Here are some behind-the-scenes photographs of Banerjee’s Detective Byomkesh Bakshi that aims to create Bengal’s winter at a time when Mumbai is literally scorching and at its frazzled end. 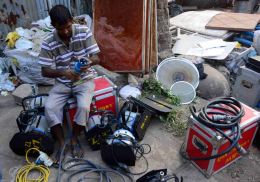 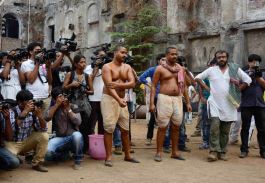 Here is the page about the photographer Shantanu Das, who holds the copyright of these pictures. Kindly don’t take the pictures without his permission. All the the pictures are copyrighted to him.