‘Ewww, this is so Bollywood!’

Everyone would love to gobble a slice of its cake. When they can’t, they are so dismissive about ‘Bollywood’ as if it was a terminal illness. Now cinema, theatre, dance and art may all be allied disciplines, but no out here in the realm of English language theatre these belong to distinct, puritanical categories.

I say this of course out of personal experience. It’s no secret that cinema is a prohibitively costly medium . So, after going through trauma with a film producer who made money with my film (Silsilaay, one of the reasons being a sutradhar cameo by Shah Rukh Khan) but wouldn’t cough up the rock-bottom fees charged by some of the actors and needless to lament, me, I thought of trying theatre. It’s a medium which offers as much excitement and creative possibilities, as cinema does.

Not entirely a novice at stagecraft since I’d watched one of my closest University friends mount and direct a series of widely appreciated plays, I convinced myself that theatre couldn’t be fraught with as many perils as cinema. Began the process of writing an original play, instead of purloining an American boudoir farce – the staple of English theatre made in India – which took a year or more.

And at this point, let me emphasise that I won’t get into the prejudices in the theatre-world against anyone who hasn’t inherited a family tradition, or has worked exclusively for stage.  Such prejudices can be dealt with, or ignored. I chose to do both.

Indeed some two or three years ago, the really offensive aspect of directing a new play Kennedy Bridge — were the churlish remarks hurled at my acting ensemble. Since Manav Gohil, the play’s lead male protagonist, came from another world so to speak, senior technicians and sundry consultants hanging around would keep buzzing, “This fellow doesn’t understand he’s on stage and not the idiot box.” Now what exactly the TV box style can be defined as was lost on me.

And since the play’s lead female protagonist, Richa Chadda, had already been seen in Oye Lucky Lucky Oye and was shooting on her free days for Gangs of Wasseypur, she was ghettoised, as the ‘filmi’ heroine. The fact that she had earlier undergone training at the Barry John School of Acting besides appearing on stage in plays directed by Nadira Zaheer Babbar, was conveniently swept under the theatre’s carpet.

Theatrewallas see what they want to see, period. Unless, of course it’s Naseeruddin Shah or Shabana Azmi, who have straddled both the worlds of cinema and theatre outstandingly, the former an alumnus of the National School of Drama, and the latter exposed to the IPTA progressive stage ever since she was a child. To date, their performances immediately ensure full houses. Om Puri and of late Randeep Hooda, Ranvir Sheorey, Konkana Sen Gupta, Ranvir Sheorey and Vinay Shukla have been appearing on stage intermittently but forcefully. Rajat Kapur and Shernaz Patel of Rage Productions are as much at home in both cinema and theatre.

It’s the newcomer, be it a writer, director or actor, who is believed to be the odd person out by the theatre community at large. Or that’s what I was made to feel with the subtlety of a sledge-hammer. “Why don’t you make Kennedy Bridge as a movie…why theatre?” I felt no need to answer or to be discouraged by that incessant, unsolicited advice. And to be absolutely honest, I was making no claims at doing ‘pure’ theatre. The attempt was to alloy drama, videography, high art (meaning the stage designs were by the innovative artist Chintan Upadhyay) and yes, the Bollywood conventions of song, dance and melodrama. Master artist Akbar Padamsee had immediately allowed the use of his vivid metascapes to be integrated into the set backdrops. 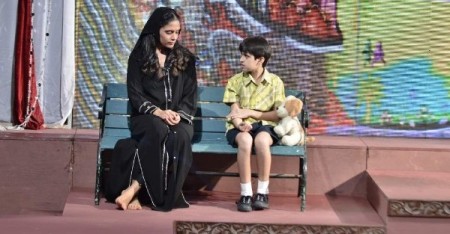 During the rehearsals I saw little or no difference between the acting styles of Richa Chadda- Manav Gohil and their co-stars Achint Kaul and Asif Ali Beg. The quartet coalesced seamlessly into the ensemble, which also included two children Abhishek and Hrithik Behani. Neither of the kids were into theatre or cinema, but were absolutely dot-perfect technically and emotively.

It’s no point naming names, or blaming individuals, for the prejudice against Bollywood. It’s there, even though film actors participate in a play for the love of it. The kind of salaries which they accept are barely likely to cover their daily meals.

Paradoxically, theatrewallas are aware that a B-town name, for sure adds to the sale of tickets, be it Kalki Koechlin, Tisca Chopra, Perizaad Zorabian, Satish Kaushik, Saurabh Shukla or Anupam Kher. They have been directed by established names in theatre, so no problem.

Another paradox: the most vital theatre venue, Prithvi theatre which was initiated by Shashi Kapoor and his family, does have Bollywood origins, and is accorded the gravitas it deserves. Guys, wisen up and smell the Irish coffee!

So, why did I constantly feel like a outsider, an interloper from Bollywood? The track record of writing on films, I guess and directing three of them, of whatever quality they might have been. If I was slightly hesitant to plunge into theatre initially, my anxieties were calmed by film critic and theatre activist Deepa Gahlot. She’s been in both the medium too, and found my apprehensions, silly.

There I was on Kennedy Bridge, then, not a life-altering experience but an important one. Backbiting was in the air and how. Examples: one, a columnist who expresses his opinion on anything under the moon and sun, walked out in the intermission, huffing, “This is Bollywood crap.” Wow does Bollywood crap have a different colour and stench? Needless to add, at the end of the show there was a beeline for photo-ops with the stars who had attended the show, right from Rishi Kapoor, Anil Kapoor, Juhi Chawla and Arjun Rampal.

Second, another theatre person gave me the warmest hug after a show, gushing “Wonderful!” only to send off an email to the producer, grumbling it was horrendous, except for his touches. Huh, what touches? Another culture correspondent felt that I was cashing in on my nostalgia once again. Oh! Sorry ma’am, but nostalgia is a virtue not a crime.

The golden lining was, inevitably, supportive comments, ranging from “This took theatre to another level” to “You got me emotionally, I was moved, very moved.”

Good or bad, but there was no indifference to the play for sure.

And the question, I often ask myself, is if I would ever do it again. Absolutely, I would. After all, life’s a stage … isn’t it?