Siddharth Malhotra comes out with his big secret. He reveals that he was the clapper boy in Ra.One. In film production hierarchy, the clapper boys are typically regarded as fourth-class staff. Those were days of acute frustration as Sid stood on one corner, clutching a clapper, on the sets of the same director who had once signed him to be his next hero. When he
was not holding the clapper in front of Shah Rukh Khan before each shot, he would be seen adjusting the drapes in the background.
Here, hear the stories from Siddharth Malhotra himself.

Being on the sets of Shah Rukh Khan

“Success has not been easy.  I was a bad student when I came to Mumbai. I had auditioned for a film with Anubhav Sinha and  abruptly shifted to Mumbai. Fortunately, we were paid for our stay and food.  We were being trained for the film and unfortunately it did not work out. Anubhav Sinha informed us that someone else would be directing the film.  I opted out and was jobless for some time. I didn’t want to go back to Delhi and model there as I was done with it. I didn’t want to become a model here too.   I started speaking to my friends who were ADs.  The best option was to turn an AD myself.  I survived on photo-shoots and commercials. My family also helped me which gave me confidence. I started assisting on various shoots. In the meantime, Anubhav Sinha started RA.One . I used to take care of backdrops and give claps.  Being an AD is a high-end service.  It was my training ground,” Siddharth says candidly. 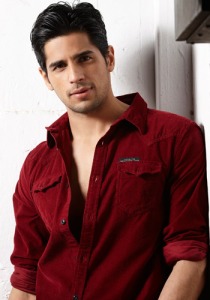 But instead of blaming life for being unfair on him. He took it as a training ground. He was an AD in My Name Is Khan too and he watched Shah Rukh Khan very closely. Not always out of admiration but to learn his trade secrets.

“I learnt quite a few things from him (Shah Rukh). He used to talk to me since I was from Delhi.  What I learnt from Shah Rukh was to make use of the props on the sets.  He improvises a lot and is a spontaneous and alert actor.  He always acts in a certain way because he instinctively knows how the scene will appear on screen.”

Why Siddharth couldn’t woo a girl in his college days

Siddharth says he had his fair share of wooing girls when he was in college. And he was not adept in wooing girls.

“Every girl is different and there are different ways to woo them. I once tried wooing a girl with roses during Valentines Day. I didn’t know which color to choose and I bought white ones thinking they were fresh. But the girl threw them back at me saying it was the wrong colour,” reveals Siddharth with his trademark smirk.

Speaking about his character in the film Siddharth  says that it is quite  similar to what he is in his personal life.

“In college, we’d try to find out the names of all the girls and then go up to them and greet them and if they smiled we considered that she was charmed.” 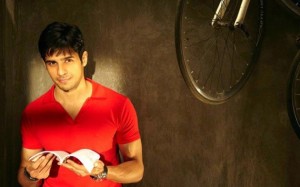 The actor admits that he is living up to the pressure of the success of his debut film Student of the Year.

“It is different now, working with Phantom Productions. I am on the sets on time and putting in more efforts. Since Vinil  Mathew was new he did a lot of rehearsals and workshop with us.  Whereas Karan has already done so many films and he is confident of his work. He knows exactly what he wants on the sets.  Just as Mohit Suri whose film I am doing next.  He has a great deal of experience but we improvised a lot on the sets.  I hope I get appreciation as I am keen to prove my capabilities,” he adds.

Why Alia and Parineeti are like chalk and cheese

He has worked with both Alia Bhatt and Parineeti Chopra and says that they are as different as chalk and cheese in their approach to film roles. 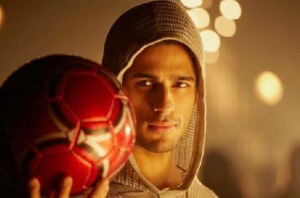 Drawing comparisons between the two he says, “Alia is very comfortable and funny. She had very little to do in Student of The Year.  She will prove herself in Highway and I am sure she is going to spring a few surprises on you.  Parineeti has high energy levels and it’s good to match up with. I think Parineeti’s laughter is the most infectious one as she laughs from her heart. Whenever she laughs, it has to be a thunderous one making us all  laugh. We enjoyed her company especially when we were all travelling by car. She thinks I am a serious person which I am not.  We were comfortable with each other as we both are Punjabi’s and great foodies.”

After playing the underdog in Student of the Year, the actor will be seen experimenting with roles in his forthcoming films.

“In Hasee Toh Phasee I have a different look. I have used hair extensions for my role. In The Villain I will be playing a character with dark shades.  It’s an intense love story and emotional driven film with lots of action.   It’s dramatic too. I have coloured my hair and sport a beard. I am putting on weight too to look older.”

Why Ranbir Kapoor is his only competition

Just one film old and the actor says that amongst his contemporaries he thinks only of Ranbir Kapoor as his competitor.

When quizzed about it Siddharth clarifies, “I was given a list of name amongst whom I had to name a competitor. Varun, Arjun and me started off on the same platform so there is no one else but Ranbir Kappor.”

On a personal note he admits that maintaining relationships in the glamour world is not easy.

“We are so busy that we do not get time to develop our relationship. But when we are alone and have some time to yourself it makes you realize how important relationships are. It may not necessarily be a romantic relationship but someone whom you can spend time with. I had my share of relationships in school and college. My earlier relationship was a long distance one so it didn’t work out. Now I have no time for love.”

“She has to have a sense of humor and be able to discuss on various topics.  I don’t know if I will find all those qualities.”

Disclaimer: All images of this post have been released through a PR agency for publicity and have been procured from public forums and social networking sites. Please inform us if any of the images used here are copyrighted and we will pull those images down.  Content Copyright: The responsibility and the sole ownership of the content is of the author who has contributed the content to this blog as a friendly gesture. Please don’t copy-paste matter from this blog. To contact the writer, please visit her author page HERE. You may also write to her at shamabhagat@gmail.com.