When IK Gujral stepped in to mend fences with Satyajit Ray

Photographs from the archives of NK Sareen 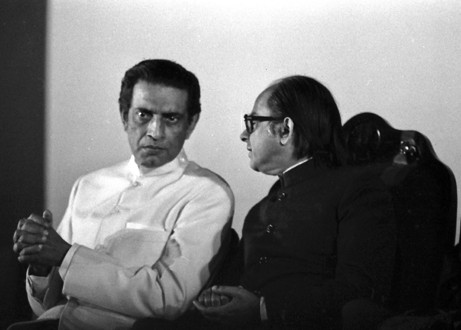 The year of 1975 was supposed to be a significant one  in the history of Indian cinema as Satyajit Ray, Aparna Sen and  popular Italian actress  Gina Lollobrigida came forward in an effort to steer the Indian International Film Festival (IFFI) across India. It was huge effort to popularise Indian cinema across the country and Ray played an important part in that ambitious plan.
But that year became significant about how such a noble effort was lost in a political rigmarole that followed soon after.
At that time the film festival made news because Ray was in the eye of a storm  for openly protesting the Vietnam War. Even though the war ended the following year, the film-maker continued to be one of the most vocal critics of the war.
The government had seen a strong ally in Ray at that time as India too officially supported Vietnam’s independence from France. India also vehemently opposed American involvement in the Vietnam War, a stand which Satyajit Ray had supported whole-heartedly.
So at that point of time, the relations between the Indira Gandhi led Congress(I) government and Ray was on an all-time high and hence ,the government requested Ray to helm the affairs of the film festival, which he promptly accepted.
The honeymoon with the government would be short-lived as Ray would have a fall-out with the Congress over his refusal to film a documentary on Jawaharlal Nehru during the Emergency period.
An interesting anecdote from the opening programme was when both Inder Kumar Gujral and Satyajit Ray talked about “kissing on screen.”
Locking lips on the big screen was a big deal in 1975, even though the Censors had officially permitted kissing on the big screen.
Present on the dias  was Ray, Manoj Kumar, Gina Lollobrigida, Aparna Sen and Gujral, when suddenly the latter announced that the Indian censor board had permitted kissing on screen and that ‘Indian filmmakers were not making the right use of it’.
Acknowledging Gujral’s view for the first time, Ray responded, “That is the tragedy.”

The programme was a huge hit. It was decided that  from 1975, the ‘Filmotsav’ will be held in other filmmaking cities every alternate year. It was also declared on the dias that ‘Filmotsav’ will be non-competitive in nature.
However, fate had other plans as India soon plunged into its darkest period called the Emergency, which lasted for 19 months. Ray protested it by declining to make a documentary on Nehru during the period. That marked the end of Ray’s honeymoon with the government led by Indira Gandhi.
With Ray moving away from it, the plans suffered a serious jolt and the ‘Filmotsav’s were finally merged in IFFI.  In 2004, the IFFI was moved to Goa from Trivandrum, since then it has been an annual event at Goa.
Before we part. here are some more pictures from the event.