Stepping up to an iconic number

Twenty three years after it was shot, the song ‘Thodi si jo pi li hai’ has become a classic in its own right and is perhaps one of the most popular songs picturised on Amitabh Bachchan.

Composed by Bappi Lahiri for the film Namak Halal (1982), it is one of the biggest hits in Bachchan’s career. The film was a ‘Golden Jubilee Hit’ which means the film ran for 50 weeks across India. If I am not wrong, then in certain parts of India, including Bombay (before it came to be known as Mumbai), the film ran for 100 weeks.

The song, ‘Thodi si jo pi li hai’ was shot indoors and N. K. Sareen was there to witness the shooting.  Here are some interesting anecdotes that he recalls when the song was being canned:

‘I was surprised to see Bachchan’s patience’

The song was being shot in a reputed studio, but I don’t remember which studio it was. All I remember was the methodical approach and the enormous patience that Amitabh Bachchan exhibited while shooting it.

There are certain traits that makes a person stand out among the crowd. And I have seen many superstars. Bachchan was literally the opposite of the characters that he portrayed on the screen.

In his heydays as a superstar, Bachchan was known to portray characters that were aggressive and borderline emotional wrecks. They would get into a fight at the drop of a hat, and this earned the superstar the moniker of the ‘Angry Young Man’.  But in reality, he was a far cry from his onscreen characters. He was reserved and patient to a point that it would sometime rankle those around him.

He was not a great dancer and this sequence required a lot of coordination  I remember that this song was being canned step-by-step by the choreographer. This means that every step of the song was being shot separately.

The process would be something like this: The choreographer would  explain the steps to Bachchan, which he practice till it was okayed by the choreographer. Only then would he proceed t0 give the shot. He would then give retakes of the same step till both him and the choreographer were satisfied with the results.

The process was tedious and boring. I was there on the sets for three hours and I witnessed only a small portion of the song being shot. Going by that calculation, I think the song must have taken at least 24 working hours to be shot completely. Perhaps even more…

Though I got impatient after three hours and eventually left the sets, I could still Bachchan, tirelessly,  working on his steps over and over again to get it right.

But it all seemed worth it when the song became super hit and later went on to achieve an iconic status in Bollywood.

But I was impatient. I  should have stuck around and shot some more pictures.

Here are the rest of the pictures that I shot. 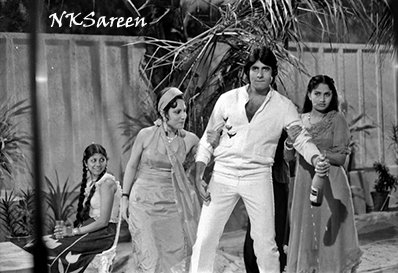