Sonia Gandhi wants Rajnikanth to campaign for the UPA

Fielding film stars as election candidates to get an edge over a hard-working politician is an age-old tactic in India. This is exactly why elections are the best times for political parties to renew their vows with stars.

This year, the UPA is reportedly attempting the mother of all coups for the forthcoming Lok Sabha elections. A recent report has claimed that the UPA chairman has approached Tamil superstar Rajnikanth to campaign for them.

Though Rajnikanth hasn’t greenlighted the proposal, speculations are rife that the ‘Thalaiva’ is inclined to accept the offer.

Reportedly, the UPA think-tank is of the opinion that Rajinikanth will be miracle cure for all its ailments in Tamil Nadu where its relationship with the DMK has run into rough weather. Tamil Nadu is also one of the few south Indian states where a film star can turn fortunes around by sheer star power. Examples of film stars steamrolling the opposition during elections is more of a norm than an exception there.

Rajnikanth has been given a free hand to choose how he wants associate himself with the party. Apparently, he can choose to contest on a Congress ticket or he can form his own party. The second strategy was earlier explored by another popular south star, Chiranjeevi.

Why this desperation to get Rajnikanth? 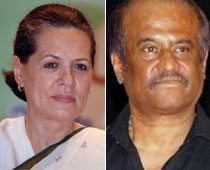 Apart from the fact that Rajnikanth will sway large numbers in their favour just by his presence, there are other compulsions as well.

The DMK has already exited the UPA and that has upset calculations on the 39 seats in Tamil Nadu. Though the Congress has kept its door open for Karunanidhi, experts agree that they might have an ace in Rajnikanth.

There are reports that the BJP too is trying to woo Rajnikanth but they are not trying as hard as the UPA.

So, will the Thalaiva say yes to Sonia Gandhi?