Of divorces and other terrible confusions

Years ago, when I was a crime reporter in Kolkata, I had unearthed an incident of graft where a government babu loyal to an influential politician was caught taking a ‘cut’ from a private contractor after allotting him a government contract to relay an important road.

Being a rookie  journalist, I was thrilled when I unearthed the nexus. My boss wasn’t as thrilled though but he still approved my article. The news came out and the government officer was immediately subjected to an internal inquiry.

There he was asked how he could manage to buy eight apartments when his salary was just about Rs 35, 000 a month. He promptly submitted a reply along with relevant documents that all those flats are owned by his ex-wife whom he divorced five years back.

As the inquiry got stuck, I found out that even the wife had ‘forgotten’ that she was divorced. Incidentally, the government officer was sleeping in the other room when I had called her.

Confused, I stopped pursuing the case and I don’t know whether the guy was finally indicted or not. 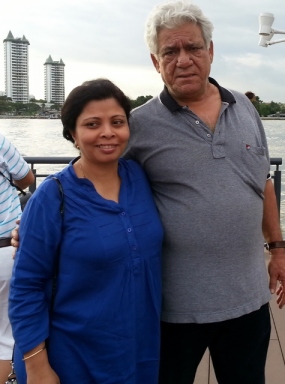 The above incident has no bearing or connection with Om Puri and Nandita Puri.

However I am equally confused this time too.

For the past two years, both Om Puri and Nandita Puri have come out in the open more than once and have said repeatedly that they are getting divorced. They have also been spotted at a family court in Bandra in relation to their divorce case.

After all the reportage, there is no reason to believe that they are not getting divorced since so much has been written about it already. If I go by all the reports and their own statements about it, it seems to me that the case is being fought keenly by both the ‘parties’ for at least two years now.

But since, the divorce case is in the realm of a court of law, I neither want to report on the case nor comment on it.

But I am still terribly confused about one thing — in spite of all that is going around, Om Puri, Nandita and their son Ishaan appear to be one happy unit.

Two days back, I was sent a few photographs which was taken last week when they were walking around the public parks of Bangkok. I couldn’t help but amuse at ourselves, the media. Why are we writing about how a couple is separating when they don’t appear so?

Are we only going by their statements or the news leaks from ‘sources’ who are insisting that they have locked horns over monetary issues? Is there something that we are ignoring when it shouldn’t be ignored?

The photographs that I received in my mail-box say a lot of things except for the fact that they are getting divorced.  Here are more photographs of the same series in the slide-show below.

The Puris were in Bangkok from July 18 to July 25, 2013. They returned to their Mumbai home on Friday, last week.

The trip to Bangkok is not an isolated celebration of their togetherness. Om and Nandita also celebrated their marriage anniversary recently in Goa.

I am told that Om and Nandita got married on May 1, 1994, so technically they will be celebrating 20 years of being together next year. But that hasn’t dampened the spirit of their 19th year celebrations which was celebrated in the right earnest. The couple stayed at a five-star near Fort Aguada. They celebrated their anniversary with a romantic, candle-lit dinner on the beach. Some of their friends, which included an Anglo-Indian Bollywood film-maker, were invited at the party too.

Not all I am writing here is from hearsay. Nandita too confirmed about the marriage anniversary celebrations at Goa’s Sinquerim Beach. She also confirmed about the Bangkok trip. When I had spoken to Om on an earlier occasion, he too spoke about how attached he is to his wife and particularly his son.

LIke any parent, both Om and Nandita seem very close to Ishaan, 16, who has grown up into a handsome, intelligent young man.

So, everything is as normal as it can be except for the allegations that the marriage is on the rocks and that they are not in love with each other anymore. Either their body language in the photographs are misleading or there is not enough meat in what we have been reading about them all this while.

I know I have deduced something which is just the antithesis of the ‘fact’ that the couple are in the midst of a bitter, public court battle to get separated.

This is exactly why I am terribly confused.

Why are we lapping up the ‘whispers’ of their separation when the couple are actually celebrating their anniversary and going on foreign trips? Or the only reality is that they have gone to court to end the marriage?

Is the unsuspecting media being taken on a joyride by somebody or the whole world is one confused lot?