Why ‘Simran’ is struggling at the box office

There is a reason why Bollywood has largely remained a family business and it is not about nepotism.

Actors from filmi families have certainly got the winds in their favour at the time of their launch and we have spoken enough about it during the whole nepotism debate.

However, there’s another aspect of being a Bollywood dynast that we have completely overlooked. This has got to do with the movie making business and the families that have traditionally directed and produced Bollywood movies, like the Chopras and Johars.

The movie making making business still, after so many years, remain a privilege of the Bollywood dynasties and nepotism has got nothing to do with it.

Most of the reputed Hollywood studios have been starving for some decent revenue in the Indian filmmaking business. It is also a fact that their performances have remained far below their own expectations.

Some production houses like Disney have temporarily shut down the movie making business in India while most others are struggling to make ends meet.

Articles after articles have been written about why they (Hollywood studios) have largely failed in the Indian market. They have not only failed, they are bleeding so bad that some of them have temporarily stopped acquiring films or distributing them.

Some studios even don’t have the money to distribute the films that they have acquired despite having a large team of high-flying executives from top B-schools across the world.

However, the scene is completely different at the offices of the family owned production houses like Yashraj and Dharma (even the ones owned by film stars), most of whom have done decently over the past decade.

Karan, Adi and Sajid — the three most successful producers in Bollywood today.

It is said that Bollywood is not a business. It is like the Mafioso. You learn to survive in this jungle after generations of experience.

It is outright difficult for a rank outsider or a fringe player to enter into the mainstream commercial movie-making business and start making money immediately, unless you have plenty of luck on your side and a really deep war-chest.

This is what happened with Hansal Mehta, who has remained a niche player in Bollywood till Simran happened to him. Simran is Hansal Mehta’s costliest film till date and perhaps only one with a leading Bollywood star.

Simran had a production budget of about Rs 30 crores. Though the production cost is nothing compared to the big budget Bollywood films but nevertheless it is supposed to be a mainstream Bollywood entertainer.

The film was also supposed to catapult Hansal Mehta and some of his team members into the mainstream commercial cinema.

Before Simran, Hansal Mehta had made either small budget films with no big stars like Woodstock Villa or niche classics like Shahid and Aligarh. You can see the full list of his films (as director) here.

However, it looks like Hansal will have to cover some more distance in order to be known as a successful commercial filmmaker because Simran is not going to be a super hit.

However it will certainly be able to recover its production cost even though the daily collections have been paltry at the box office.

For all of you who are wondering why Simran scored such bad figures at the box office, here are five probable reasons. 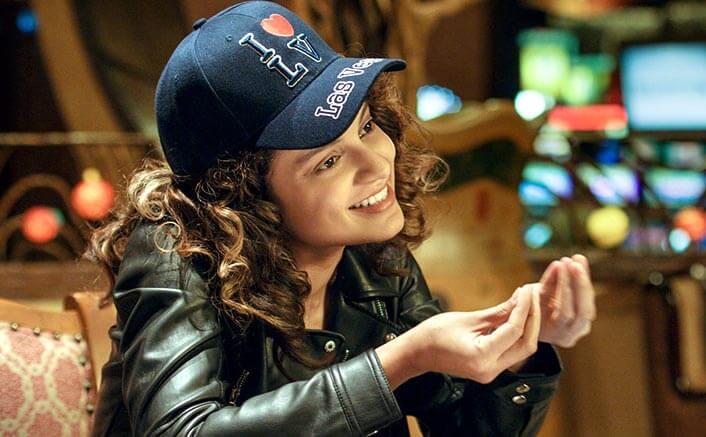 1. Complete ignorance about the audience: The film is about a Gujarati lady called Praful Patel and her dysfunctional family. The film released on the eve of Navratri, the most pious and the biggest festival of the Gujaratis.

Yes, we can talk about feminism and cinematic liberty but we cannot forget that the film, about which we are talking about, is a commercial film and supposed to make business by making people spend money to see it at the theatres.

I work in a Gujarati dominated office space and I can say with some amount of certainty that once the word got out about how the film ‘exposes’ the double standards of liberal Gujaratis, the elders and middle-aged Gujarati audience were ticked off.

Navratri is also a time when the younger ones in the families turn sanskari or at least make a show of it. They wouldn’t openly endorse a film that goes against the very basic family values that they are celebrating during Navratri. By talking about the Gujaratis, I am using them as an imagery for the rest of the middle-aged family audience in India.

During festivals, it is the family audience that brings in the money and any novice would know that.

Hence, the TG (Target Group) was lost and with that, any Indian family audience that fall in the same category. The majority of the family audience decided that it was not a good film to watch. That word-of-mouth spelled disaster for the film.

The timing of this film, given the content it carries, couldn’t have been worse.

The film could have targeted New Year but no, it had to come out on a religious festival.

2. The changes in the script and the resultant hotchpotch: Now that the entire original script has been posted online, one can clearly see what was lost in translation and what was deliberately discarded.

The stamp of forcible intervention of too many people is all over the film.

There are so many questions that remain unanswered in the film. For example: Why was Kangana and her father was so distant and distrustful of each other? It was there in the original script but not retained in the final script.

The scenes of the bank robberies were also hastily done. The original script shows her doing a recce of the banks that she is going to loot. That part is missing in the final film too.

That the script evolved over time and it became a hotch-potch of sorts.

Tell me, which leading producer or director would allow that to happen once the script is locked?

3. The film is too dark for a festival release: Navratri, Durga Puja, Diwali (that follows) are festivals of light, joy and laughter.

This is the time when people dress up and come to the movies in groups.

Friends gang up. Families of tens come to the movies to have fun together and share a huge tub of popcorn.

Now, are you expecting all of them to come and cry at the theatre? No, na?

Now, the major part of Simran is a dark film where at every point of time the main antagonist is struggling, falling, getting hurt, having bad sex and basically getting messed up.

Forget about entertaining you or cracking you up, this film makes your heart heavy.

There are some comic reliefs (which were introduced later on) but basically the film is dark. This script is definitely not a festival release. Going by Hansal Mehta’s earlier scripts, he definitely loves dark scripts but this was supposed to be in a different league and a festival release — a fact that was completely ignored.

You don’t laugh with Praful Patel but you tend to cry with her. You are told every time how messed up she is as a person.

Now, tell me honestly, are you up for some depression during a festival where you are supposed to dance, eat and make merry?

Simran is reportedly inspired from the life of Sandeep Kaur, who was known as the Bombshell Bandit. You can read about her, HERE

4. The film has become a Kangana Ranaut festival:

The film doesn’t have any recognisable face other than Kangana Ranaut — not even an actor who you can readily recall.

As a  result, you turn blind to them after a while and only see Kangana in every frame of the film.

The film is entirely about her and her journey in an alien land. There is nobody to share her burden.

Now, let’s look at the other hits which also had Kangana in the lead. In Queen she had Rajkumar Rao, Lisa Haydon and other guest appearances.

What happens here? You cannot even take your eyes off Kangana. If, by chance, you get tired after watching her for a while, there is absolutely no relief.

That is what happened in the end, too… many people complained about too much Kangana in the film, even some of the critics who reviewed the movie, examples are HERE and HERE.

The audience desperately needed one more recognisable actor who was nowhere to be found.

5. Last but not the least, was the lopsided promotional strategy of the film:

The Rajat Sharma interview changed the course of the entire promotions.

What was supposed to be an appearance to promote a film, turned out to be an occasion of muck-fest and washing dirty linen in public.

If you ask me, I would blame the marketing strategists and not Kangana Ranaut for what happened.

Sure, Kangana is a feisty woman who will answer every question that is posed to her. But it is the job of the marketing guys to ensure that she is seen at the right media interactions, grants one-on-one interviews to the right journalists and ensure that the content that emerges out of it promotes the film and nothing else.

It is a journalists job to get an interview that will sell and go viral, it is the job of the marketing team to ensure that only the film benefits out of it.

Going by the way how films are promoted these days, we know that a Bollywood PR does this job really, really well. Then how come this one time every rule book was thrown out of the window?

It seems that the journalists who interviewed Kangana, did their job really well. But the marketing team who were supposed to promote the film, had a deeply flawed strategy.

Why was there so much negativity surrounding Kangana when her film was about to release? Surely there’s something major we are missing out here.

But this is for certain that the whole promotional strategy was deeply flawed. This is definitely not how it should have happened.

Did Kangana not listen to the marketing team or did the PRs never bothered to check how the interviews are going to pan out?

Directors like Hansal Mehta are great filmmakers. They make niche films with subjects that nobody else would touch and they are bloody successful at that.

Shahid and Aligarh are classics. But they are not mainstream commercial films.

Just like Praful Patel at the Las Vegas casino.

When you throw caution to the air and continue gambling even when the stakes are really high…. you stand to lose.

Just like Praful Patel at the Las Vegas casino.