Karan Johar and the art of bitching

By SOUMYADIPTA BANERJEE on March 7, 2017 • ( 7 Comments )
Karan Johar recently lashed out against Kangana Ranaut during an interview with Anupama Chopra.
The video, recorded slyly on a phone camera, has created a stir immediately after it was released on Twitter.
Here is the video.
His reactions were spontaneous and to the audience, it seemed like it was building up inside him. Anupama Chopra just gave him an opportunity to vent and Karan just latched onto it.
Karan was asked about Kangana’s comments on his show Koffee with Karan where Kangana told him on his face that if ever her biography is written then Karan Johar would be playing the character of a Bollywood mafia who is a ‘flag bearer of nepotism’ and ‘intolerant of outsiders’.
She also said that it was Karan Johar who made fun of her English (or the lack of it) on the same show some years back. This, Kangana said, encouraged her to work harder on her spoken English and conquer the handicap.

Nobody ever gave it back to Karan the way Kangana did. She said a lot of other things too and the best part is, she said all of them on his face. Karan, despite having plenty of opportunities, chose not to defend himself.

But Karan Johar, being the person that he is, chose to take it out on Kangana where she was not there to defend herself. This typical high-society behaviour of talking behind somebody’s back is known as bitching and Karan certainly transformed it into an art form that day in front Anupama Chopra.
Some people who have worked with him, describe him in private as bitchy, snappy and moody. It was a rare opportunity to see the side of Karan Johar that we generally hear about but never see in public.
Okay, enough about how Karan Johar as a person is. Lets concentrate on what he told Anupama Chopra in the video.
Karan said that he is tired of Kangana playing the victim and taking advantage of the fact that she is a woman.
Interestingly, Kangana never played a victim or asked for sympathy on his show. She was completely in charge and she was just stating facts.
While we cannot do anything about the fact that Karan Kohar is not a woman, but playing the victim card and asking for sympathy is clearly his forte, like many before me has pointed out.
His autobiography is filled with references about how he is a victim of his own sexual preferences and professional expectations.
If that is not enough, he has written plenty of blogs that might make you cry looking at his so-called ‘miseries’. Like THIS one where he says he doesn’t get enough sex or THIS one where he says that a lot of people abuse him on Twitter because of his sexuality.
Karan further stated that he cannot be accused of nepotism. He rattled out a series of names of first-time directors who he introduced through his production house. Well done!
This proves that Karan Johar is either dumb or he is an expert in cleverly shifting the goal posts. 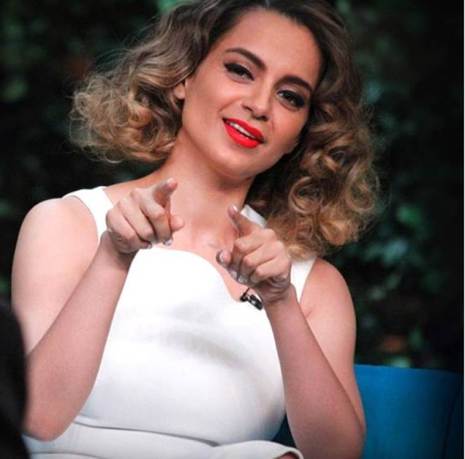 Kangana Ranaut in the now infamous episode of Koffee With Karan

Kangana was, of course, not referring to the directors who Karan so lovingly nurtured in his production house. She was referring to the actors or the lead roles, because she is a heroine. We all understood that? Didn’t we?
Oh wait, Karan Johar didn’t. Why? Because Karan Johar only works with kids of filmy families. The only outsider he has worked with, is perhaps Shah Rukh Khan.
Karan Johar then went on to say that he is gracious and magnanimous because he chose to let that part remain on the show. Oh, how kind of him!
Let’s face the fact that he didn’t have too many options because Kangana’s comments were sure to drive viewership and no channel would have agreed to abandon it. Hence, the channel just went ahead with controversial content as their promos to gain TRP (which Karan so correctly predicted during the shooting of the episode).
So, even if he wanted, he couldn’t have axed Kangana’s explosive comments from the show because that would mean that he would be at loggerheads with the channel.
Lastly, we talk about the most outrageous comment from Karan Johar where he asked Kangana to leave Bollywood if “it was such a bad place”.
Kangana has never said ever that Bollywood is a bad place. She has said it over and over again that it is tough for outsiders to sink in their teeth in Bollywood because of people like Karan Johar who is opposed to the idea of hiring actors who don’t have a pedigree.

By asking her to leave Bollywood, Karan Johar lived upto Kangana’s observations about him – of being intolerant and ‘a mafia’.

It is curious that Karan has carefully chosen the time of this attack. Kangana is already facing a barrage of insults from the film industry and her big-ticket film Rangoon, directed with Vishal Bharadwaj has flopped big time at the box office.
She is down and perhaps more vulnerable than ever.
But then, who can expect empathy from a big bully like Karan Johar?
Clarifications: I was recently informed about some facts from a friend of Karan Johar and those facts are being presented here to maintain balance to this piece.
1. Kapil Sharma show was delayed but it was aired. So, the reference to the episode not being aired has been removed.
2. I was informed that Karan launched Siddharth Malhotra who had no family connections with Bollywood in any manner.
3. I was also informed that Aalia Bhatt, Varun Dhawan cannot be considered as ‘star kids’ because their parents were not film stars. Also, Varun and Alia were launched when their parents were not in the peak of their careers.
4. It is not true that Kangana Ranaut never worked with Karan Johar’s production house. She worked in a film called Ungli which flopped at the box office.
5. I was informed that Karan Johar never requested any cuts in the Kangana episode of Koffee with Karan. In fact, from the very beginning, he advocated that Kangana’s observations about him should be presented unedited.