He works hard for his brood and butter. An angry youngish man, he toils away at multiple jobs, looking especially glum as the night attendant of a car parking lot. Worry not. Romantic relief is on the way. Enter an angelic, jabberwocky girl who’s visually impaired.

Essentially a two-handler, Deepak Tijori’s Do Lafzon Ki Kahani (title inspired by an R D Burman song tuned for The Great Gambler) aims to activate your tear ducts and endure yet another adaptation of the South Korean flick, a weepie called Always (2011). Grrrr, at the risk of reiteration, you wonder why Bollywood has been seized by a serious case of Korea-itis?

Plus, eerily enough the plot premise of a reformed ‘rowdy’ and a sight-challenged girl is also excessively reminiscent of the Telugu hit, Nuvvu Vastavani (2000) which could at least boast of a terrific music score and impressive performances by Nagarjuna and Simran. Moreover, Lafangey Parindey (2010) featuring Deepika Padukone and Neil Nitin Mukesh also travelled down the same route. Hoot.

Ergo, actor-turned-director Tijori (who shouldn’t have turned) has an extremely stale tale to retail. Presumably for a dash of difference, the location’s Kuala Lumpur, although the backdrop of Mumbai, Meerut or Mussoorie would have been more than okey-dokey. 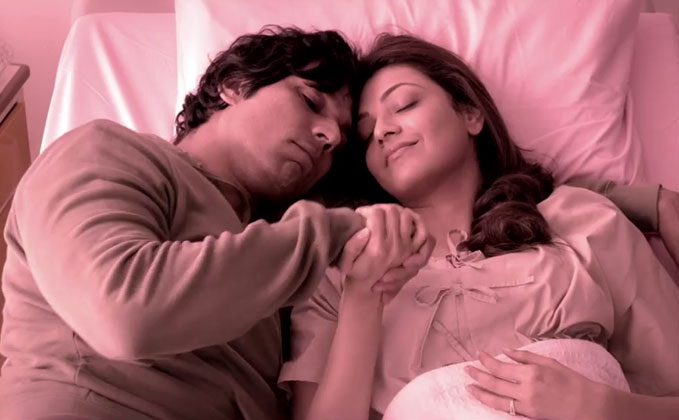 Over to the hokey love story, then, which has you flabbergasted. Why the trendily dressed, visually impaired teacher (Kajal Aggarwal) doesn’t upgrade her cosy apartment with a TV set, defies your imagination. A glutton for punishment perhaps, she treks it out to that parking lot to watch one of our desi soaps telecast at 8 pm, in the company of Mr Brood. And although they’re as different as chalk and cheddar, they bond, romantically bond.

Next: apna Brooding Badshah resolves to get over his murky past. A mixed martial arts fighter once, he gets into shape to return to square won. Why? To raise funds for a cornea transplant for his TV-addicted sweetheart. The rest you can guess with your eyes and ears closed.

The action combats are far from exciting, the emotional baggage carried by Brood sir is so heavy that it wouldn’t fit into the largest airport trolley in the world. And it would be an understatement to say that the script is wafer thin.

Again, as in the case of Sarbjit, Randeep Hooda proves to be the show’s saving grace. He’s intense, especially in the course of the sequences during which he trains to retrieve his physical agility. Frankly, Kajal Aggarwal, is just about serviceable.

Unsolicited advice: DLKK is as avoidable as an afternoon walk in Mumbai’s current temperature of 33 degrees C. plus.

Original Link Of the Review