How Farah Khan forced the Universe to conspire for her

We already know what a far-sighted and visionary choreographer Farah Khan is. She smashed the phony exaggerated expressions and brought in fresh, a la mode and natural song compositions.

Farah Khan when she had just gained some fame, about 15 years back

I fell in love with her during our first shoot together for a refrigerator commercial and I always knew ‘Here is a very special woman’.

Bringing out the best in her actors, today she is loved, not just as a director, choreographer but also as a Woman of great might. She carries her success so lightly, because she has carried her tragic struggles very lightly too.

Read on and get truly inspired.

As kids Sajid and Farah saw the glitz and pace of Bollywood stardust thanks to their filmmaker father Kamraan Khan and mother Menaka Irani. Their affluence vanished overnight when her father’s film ‘Aisa Bhi Hota Hai’ nose-dived at the box office.

Just like an emblematic Bollywood film script, they lost all their money, home, cars, name and fame.

Kamraan Khan was a munificent and large-hearted man, helping his extended family through his good innings. This financial and professional debacle made him take to drinking and seclusion. Being out of work and sinking in despair, the entire family was barely surviving. Like most families, they crumbled too.

Menaka Irani moved out of the home with the little kids and started working as a housekeeper at Hotel SeaRock. Living in a store room for all of their growing years, Sajid and Farah still looked after their father.

Barely 16 when Farah’s father passed away due to Cirrhosis of the liver. Unemployed and short of money, Farah and Sajid literally had to ask around for funds for the looming funeral.

Destiny is not a matter of chance. College going Farah would watch MJ on TV and practise dancing. The crush developed into love and passion. She chased and trailed Mansoor Khan for months to hire her as an assistant. While she watched Saroj Khan choreograph Aamir Khan on set, she was amused with the theatrical steps and day-dreamed that if given a chance, she would redefine choreography. Once you have a dream and simply believe in it, the Universe conspires for its fulfilment. 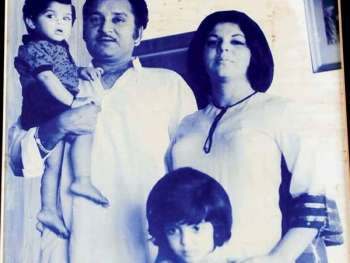 Interestingly, Saroj Khan did not turn up for the shoot the next day and Mansoor Khan was stranded. Farah jumped and yelped that if she will choreograph and win everyone an award. She did and the song ‘Pehla Nasha’ is a milestone song in choreography, vision and conception.

Farah Khan had arrived and the rest is history !

Here is a bonus for all you Farah Khan fans, did you know that she did an item number way back in 1987? Well, here it is! Yes, Farah is almost unrecognisable here.