Stereotype is like a drug. And who understands it better than film makers? When mediocrity works they feel hopeful.They get trapped in their own web. Director Madhur Bhandarkar is one of the biggest example. Else, why would a director after giving a mammoth flop like Heroine, make Calender Girl?

Madhur has been making films on these ‘behind the scene’ subject for almost a decade. Only once he tried to dabble his hand in comedy, but soon took a U-turn and made a humongous debacle Heroine with Kareena Kapoor. (Needless to say that he went through tough time with Aishwarya Rai Bachchan’s sudden exit from the film.) Kareena agreed to bail Madhur out of the situation, but she fell prey to a rickety script and mediocre execution. Ideally, after such fiasco, a director would come back with a subject that would stir the world around. But Madhur decided to make a movie on calender girls instead. Which didn’t even stir my cup of tea.

The teaser of Calendar Girl got thumbs up from Madhur’s friends and associates. Social networking sites retweeted the teaser and few journo friends obliged him with gracious tweets. But deep down, even Madhur knows that Calender Girl is not his best work. It’s repetitive, period.

Madhur reminds me of Alice In Wonderland. The girl who fell into the magic hole, and believed that the world around her is for real. Most directors in our country goes through ‘magic hole’ phase. From Ram Gopal Varma to Sujoy Ghosh. Most makers feel that they have carved their niche, and that’s when they lose the plot. Take directors like Subhash Ghai and Vikram Bhatt for example. By the time they have realized their mistake, they had already missed the bus.

The predictable teaser of Calender Girl saddened me the most. Madhur repeats his staple scenes like models flashing lashes, blink bras, glossy lips, stud photographers going click crazy, manipulative agencies, power games played by fashion magazine editors and his cliché touch of gay designers and makeup artists. What’s new? Madhur has been the founder of this genre and had set a benchmark, he shouldn’t tamper his own reputation. In layman’s language, this is called Ram Gopal Varma syndrome. And I am sure that Madhur will disagree and argue with me. Like any emotionally attached maker would. Even I would argue if someone trashes my work of art. That too simply by watching a two-minute trailer. That’s human.

But aren’t we suppose to judge a film by its teaser? We have already seen films talking about the struggle, politics, sexual exploitation that one has to go through to achieve stardom. How different can it be from his pervious films like Page 3, Traffic Signal, Corporate, Fashion and Heroine? And frankly speaking who cares if it’s a fictious tell-all story on Calender Kings and the Mother Fishers! 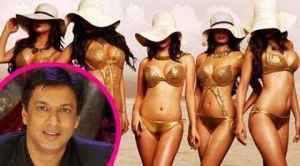 Personally, I think Madhur’s best job till date is Fashion. Apart from that, each time he tried talking about a particular issue, he would do that on a superfluous level. His perspective is myopic. Madhur needs to go back to his roots. His film Chandni Bar changed the perspective of women centric cinema. Actresses like Tabu, Raveena, Priyanka and Konkona won accolades for playing central role in his films. Unfortunately, Madhur turned his forte into formula. He has started making ‘projects’ and with ‘haanji… sirji… wahji…’ friends around he started believing that his kind of films will work.

A king is a king, who knows how to choose a kin. The thirst of a creative soul needs to be nurtured with honesty. One who takes the easy route, vanishes. And Madhur needs to evaluate his own self. He has been a self-proclaimed fan of RGV, but that doesn’t mean he’ll have to follow his mistakes too.He shouldn’t wait for the fate of Calender Girl. For all you know, the film might recover money and get him a decent share of profit too. But is that all Madhur expects from his life? He should seriously work on subjects that deals with far important issues, other than semi nude models posing for a liquor magnet’s luxury calendar in a star cruise.