She might talk to you about her forthcoming film, the man of her dreams, ways to secure world peace or even about the Black hole information paradox. But Rani Mukerji will never talk about the secret life of Aditya Chopra or her plans to start a family. If you don’t believe us, you can Google her recent interviews and you will notice that she had the same set of answers ready for any question that related to her having kids (I am not planning to have kids now) or Aditya Chopra (he is a great guy but let’s not talk about him now).

But something changed when Rani was speaking to me. She not only spoke at length about these two topics but also revealed how she wants to name her kids when they start going to school. Surprised! Well, yes I was surprised too when Rani told these things to me. But then, I could guess that maybe she was too happy because Mardaani has garnered all the critical acclaim it could get. never mind the fact that it has got an A certificate and the producers have applied for a re-certification ahead of the sale of its satellite rights. It’s actually the first ‘Adult’ film ever come out of Yashraj studios.

When we enquired about how we are supposed to address her, Rani Mukerji said that she wouldn’t prefer to add the Chopra surname to her name. But wait! She wants her kids to be named Chopra only and not Mukherjee-Chopra

“I am not going to change my name. When I admit my children in school they will carry the Chopra surname but for my fans I will be Rani Mukerji,” she says.

But now, this answer doesn’t mean that she’s going to have a child within the next nine months.

“I am not pregnant. Yes, I would like to be a mother and have children but it will happen when it has to happen.  Like every woman, I will take a break from films during that phase as it’s physically not possible to work in that condition. In Hollywood, they (actors) work when they are pregnant. Most women take a break because they cannot leave their children home and go to work. It’s depends on your choice and how progressive your husband is,” she says. 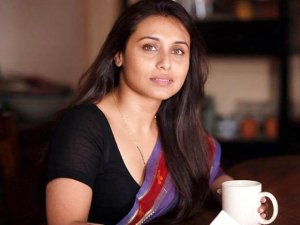 Yes, Rani wants to work when she is pregnant and even when she’s a new mother. “In Adi, I see a person with modern values. Even if I take a few days break, he will give me that choice.  I will go out there and work. I can take a break but I will never retire,” she states emphatically.

Does it bother her that ‘Adi’ is like an invisible Godfather in the film industry? “Marriage is just an extension of our lives and that doesn’t mean he has to be seen.  We will always be together but as a person Adi has made a conscious choice to be known for his work rather than be seen (at parties etc). I don’t mind that as far as he is visible to me,” Rani jokes.

Rani then goes on to reveal titbits about their private life as husband and wife.

“Like my father-in-law (the late Yash Chopra), Adi is big foodie. On one hand he feeds me silly and on the other, he wants me to be fit.  I keep wondering what I should do,” Rani says.

Before she ends the interview, she admits that the biggest dichotomy in the life of a reclusive Aditya Chopra is that he is married to an actress.

“He loves to be mysterious and his biggest dilemma is he is married to an actress.  He loves to go to theatres and watch films as a common man and see the reaction of the audience. I think the reason behind the anonymity (that Aditya Chopra seeks constantly) is because he wants to be in touch with reality and lead a normal life. He wants to do those things.  Once he’s in the limelight, his sense of being connected with the reality will fade away. I respect his choice. Even I try to remain private. As a wife, I need to protect and respect his sentiments. When we want to meet friends, we go out. Otherwise, we prefer being at home, having a quiet dinner or just talk to each other. I will never force to ‘come out’ because my fans want to see him. No way,” she concludes.

Disclaimer: All images of this post have been released through a PR agency for publicity and have been procured from public forums and social networking sites. Please inform us if any of the images used here are copyrighted, we will pull those images down.

Content Copyright: The responsibility and the sole ownership of the content is of the author who has contributed the content to this blog as a friendly gesture. Please don’t copy-paste matter from this blog.To contact the writer, please visit her author page HERE. You may also write to her at shamabhagat@gmail.com.