The week that was… Warning, khatra, verboten, don’t even think about it. Think? Not of the obvious my pancakey coos, but about my temper right now. Ek toh, I’ve been waiting for those headlines announcing Aaya saawan jhoom ke. The clouds get dark, there are photos of high tide flooding the roads and soaking the cars — my Jaguar and Porsche stayed sturdy though – and some nutter called me to keep my tanks free from contamination to avoid mosquitoes slash dengue. What tanks could this pistachio be talking about?

Joh bhi, tumhari Bunny is peeved, and the hafta gone by wasn’t exemplary in showbooze either. Enough for me to drown my sorrows in a Spanish sherry. First of all, my bua, Begum Vajiran has returned from her muluk, south London, and is yammering away about the good-golly stuffy in bad Bolly. Ignoring her right now, I have enough of my own groans and gripes…eeeeee.

Who clicked those photos anyway? 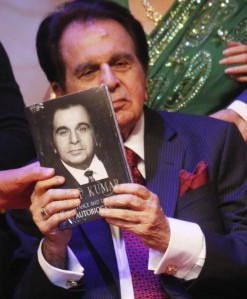 Was perusing the new arrivals at the book nook of a five-star hotel types. No no, not the one which used to be run by Simi Garewal’s sister. That’s packed up I believe, the book nook that is. Ooof, why go into the Garewal gehrai? Let me just say, I leafed through the much-anticipated autobiography of Dilip Kumar, as told to journo Udayatara Nayyar and from the look of things, piloted by Saira Banuji.

I must have been a toddler then, but my mum would  lug me along to photo-sessions of stars she adored. Mums can be strange sometimes you know. So there I was gurgling at quite a few photo shoots of Dilip Kumar saab by the legendary photographer Gautam Rajadhyaksha. And could detect that quite a few photos used in the book are from those wonderful sessions. Cool, it takes a legend to shoot (with a camera) legend.

But to my horror, the cover pic was credited to santabanta.com! Really now.

Dilip saab has been keeping ill health but surely the author and pilot should have given credit where it’s due. On my part, I just won’t buy the book. Not done.

Oho, home alone or so goes the buzz

Alsoooo, I’m pretty upset to be told that Sussanne Roshan and her two angelic kids are residing in an Andheri high-rise, where others still have to move in. Do hope the security is super-strong, and the place has got its no-objection-certificate or whatever has to be got from the concerned authorities. Concerned??? I do hope so. If you ask me Suz and Dugsu should just make up. I’d feel better.

So now, it’s the sound of money

More cause for gussa: information has trickled in that the much-yakked-about Rajkumar Rao (once Yadav) is now getting fancy-shmancy. He’s got himself a status symbol of a car, and has jacked up his fee. As a filmmaker of his vague acquaintance, groused, “He expects us now to pay for his EMIs.”

See, there’s nothing with an actor asking and getting the money he deserves. Naseeruddin Shah continues to believe that he was short-changed in his heyday, and maybe he was.

The thing about apna Rajkumar is that he’s asking for a fee which will suit his new princely name, if not anything else. Grapevine has it that he signed Citylights for Rs 7 lakhs and now wants Rs 50 lakhs a project. Quantum leap, no?

In praise of Sunny.. neck upwards

Sach mein, I couldn’t believe my eyes and ears. Vajiran for some reason insisted that I should watch Ragini MMS2. Just to shush her up, I did, suffered through the cheesey flick, but from one angle, my bua was correct. Sunny Leone, despite all her bump-n-grind routine, looks pretty cool in close-ups. Her make-up is dot-on, very glam. Sunny’s happening, would you believe this, from her neck upwards?

Vajiran has been yelling form my rooftop that she prefers Sunny to the likes of Katrina Kaif and Priyanka Chopra. I don’t have an opinion on this actually…I drool only over Ranbir Kapoor. What to do? The R K boys rock. About the upcoming Armaan Jain, I’ll reserve my take though. Let’s see his first movie. Drat can never remember its title witle.

Word is that the Shroff family was underwhelmed, to put it politely, by the look created for Tiger in Heropanti. Director wanted it that way, it seems. Which way? As chikna as a new-born baby. No stubble, no mouche, as a depature from all the scruffy bears who’ve been popping up in the movies.For sure, now Tiger’s look will be redone. Good idea.

Funnnnnnneeeee! A foolhardy producer – probably in the mood for suicide – offered a project to Jacky Bhagnani. Instead of falling at his feet, guess what our very picky-choosey Jacky did.  He asked the producer to send the script to his secretary. If the secretary approved of the script, Jacky would think about it and get back. The producer’s still giggling and guffawing.

So, that’s it for this weekend, my humdums. Have a good one. Ta.