THERE’S SOMETHING ABOUT HEMA MALINI

Exclusive photographs from the archives of NK Sareen

But did you know that the star actress was once the central point of a quadrangular love story that played out just before she got married?

Yes, you read it right.

It was a love quadrangle that caught the imagination of cinezines in the seventies. The actress had the industry’s three biggest superstars — the much married Dharmendra, Jeetendra and Sanjeev Kumar vying for her affection. Much has been written about it, with those close to them revealing several stories of how the three superstars tried to woo her.

It also came as a surprise when Hema Malini came on the show, Koffee With Karan, a couple of years ago and confirmed that all the rumours around the four were, in fact, true.
She was quite forthcoming in her biography too, where she revealed that at one point of time, the three biggest stars of Bollywood were chasing her and there came a point when Hema couldn’t make up her mind between two of them.
Here’s looking back at one of Bollywood’s famous romantic entanglements.

How it all began

Hema Malini clicked by NK Sareen on the sets of ‘Razia Sultan’ (1983). You can see the faint image of Parveen Babi in the background.

Sanjeev Kumar, who proposed to Hema Malini on the sets of Sholay, got rejected outright as the actress was having an affair with Dharmendra. On seeing Hema being wooed by the macho star in front of him, Kumar was extremely hurt and conveyed to his director Ramesh Sippy that he didn’t want to be seen in the same frame as Hema in the iconic film.

Sanjeev then apparently asked Jeetendra to help him woo Hema.

Later, Jeetendra too jumped into the scene as a lover. Hema later recalled the affair fondly,  saying that the two almost got married.
Some Bollywood-style drama ensued, where it was speculated that Dharmendra literally barged into the wedding preparations (with Jeetendra) and took Hema away from the mandap. Other reports say, that the macho star incessantly telephoned Hema to change her mind, while the latter’s girlfriend, Shobha did the same (with Jeetendra).
Finally, each one returned to their respective mates and tied the knot.
Dharmendra and Hema both changed their religions and got married. The actor till date continues to maintain a balance between two families — one, with his first wife, Prakash and sons, Sunny Deol and Bobby Deol, and  the second being, Hema Malini and her daughters, Esha Deol and Ahana Deol (who are both married).

In Bollywood, we have a habit of looking into the areas which are lit up and conveniently choose to ignore the dark underbelly. Many refuse to admit that the Hema-Dharmendra love affair may have perhaps dislodged a family, hastened the death of an actor, while another completely lost her bearings.  Here’s a look at those who got waylaid.

Disclaimer: In no way am I trying to say or imply in any manner that whatever happened was due to Dharmendra or Hema Malini’s actions. However, this is just a narration of a chain of events that followed when the star couple declared their love for each other and admitted to dating. During those days, admitting to dating meant that the two were getting married.

Why the two Deol families could never come together

For the rest of his life, after his marriage with Hema Malini, Dharmendra kept oscillating between two families and most of the time maintaining a fine balance between them. However, most of the times it would be Hema Malini, who would be on the forefront as a parent of her two daughters.
The rift between the two families came out in the open again when even after Hema Malini proudly declared that Sunny and Bobby Deol will attend her youngest daughter, Ahana’s wedding.
They didn’t turn up.
Few ludicrous reports claimed that the two actors were camera shy and hence, they chose to skip the wedding, while other reports stated that the Deols did not want to hurt the feelings of their mother, the reclusive Prakash Kaur. It is true that Dharmendra’s marriage to Hema took a great toll on Sunny, Bobby and especially their mother Prakash Kaur who turned into a recluse. However, some reports  also claimed that Dharmendra still maintains a great balance between the two families, while still choosing to live with his first family.

It was a well-known fact during those days that the men of Sanjeev Kumar’s family had not lived beyond the age of fifty due to a congenital heart decease. Sanjeev Kumar had himself reiterated this fact many-a-time to his friends hinting that he too would die early as he had inherited the same heart condition.
Reports suggest that Sanjeev Kumar took to alcohol heavily after Hema Malini rejected him. Post the rejection, a number of close friends had tried to ward the actor off alcohol but it seemed that he was on a warpath to destroy himself. The actor died a lonely death after he suffered a massive heart attack. A lot of people close to Sanjeev Kumar say that he would have lived longer had he not indulged himself into so much alcohol.
Perhaps if he had not been rejected outright by Hema, Sanjeev Kumar may have lived longer. Who knows?

The Dharmendra-Hema Malini love story claimed one unlikely victim that not too many people talk about. It is Sulakshana Pandit, one of the most brilliant actors Bollywood had ever seen.
Sulakshana Pandit was madly in love with Sanjeev Kumar while Sanjeev would use her as a shoulder to cry upon because Hema would not respond to his overtures.
Pandit gladly offered her shoulder to Sanjeev Kumar because she thought that Sanjeev would come around and start loving her. But her world turned upside down when she figured out that Sanjeev was not interested in her and was turning into an alcoholic. In her own admission, Pandit shared that she was close to committing suicide after the actor’s death.
Sulakshana slowly started turning into a recluse after Sanjeev’s death and renounced the world around her. Things have come to such a point now that she has completely switched off from this world and lives in her own world. She doesn’t step out, doesn’t meet people and stays all my herself the whole day in her own room. Rarely she steps out to visit her farmhouse but she is not interested in what is happening around her. Her sister Vijeta Pandit has admitted in an interview that the unrequited love for Kumar and his death scarred her so much that Sulakshana Pandit never recovered from it.
——————————————————————————————————————
Before we go, here is a collage of exclusive photographs of Hema Malini shot on the sets of Razia Sultana (1983) that starred Hema Malini, Dharmendra and Parveen Babi. The film was directed by Kamal Amrohi and the music was scored by Khayyam. Though the film was a disaster at the box office, its dialogues in Urdu were widely appreciated. 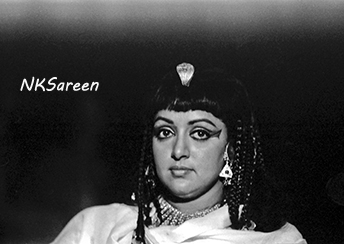