A few hours to go and you will be bombarded with opening day figures and thereafter day-to-day updates of how the two films are racing towards  ‘100-crores’, the new benchmark for a commercial Bollywood film.

Even though, technically the two films are releasing in a gap of six days but their run towards the 100-crore mark will be keenly watched by everybody. The film that doesn’t reach the magical figure will not be considered a super, duper hit.

During the era of the golden oldies, stars looked forward to their films completing golden jubilees and silver jubilees. These days, it’s every producer’s dream to reach the 100-crore mark because it means that the audience have accepted the film. This also means that the film will spell huge profits for the producers and likewise for the distributors.

Every trade analyst worth their figure will be firmly fixing their eyes on the box office performances of the two upcoming Eid releases.

Important disclaimer: The above-mentioned films are not out till now. So, whatever I am going to write next is not a comment on the performance, business strategies or the market policies of the above two films. I have not even considered these two films and technically they cannot be considered because they have not been released.

Are all box-office figures real?

Two months back, Twitter timelines were abuzz after angry exchanges between filmmaker Sanjay Gupta and trade analyst Komal Nahata. The conversation on Twitter revolved around the box office performance of Sanjay’s film, Shootout At Wadala. The sharp and sarcastic exchanges between the filmmaker and the trade-analyst were reported on some websites too.

While Komal claimed that the distributors of the film have lost money, Sanjay Gupta claimed that Komal was not presenting the correct picture.

Either or neither of them may be right, I don’t want to comment on that. But it is true that some box-office figures are allegedly fudged. It has become a regular occurrence now-a-days that some filmmakers and a section of trade experts hand-out a certain figure while another section paints a completely different picture of a film’s box office performance.

If the film’s box office figures are out there in the open then how come people in the trade differ so widely?

A trade expert I spoke to tried to provide an answer to the confusion. According to him, a set of trade experts get their figures from the producers while another set gets their figures from the distributors. Interestingly, some filmmakers try to impress the audience by inflating their box officer numbers, while the distributors try to suppress the figures because it gives out an exact indication of their earnings.

Till date, the film press usually don’t collect box office figures directly from the distributors while some production houses are ever ready to part with the information.

Please remember that I am not saying everybody in Bollywood fudges figures but it is alleged that some of them definitely do and for obvious reasons, I am not going to pin-point any of them even though I might know some of the names.

How are the numbers fudged? And why?

People who fudge box office figures take advantage of the fact that there is no mechanism where a member of the public can access accurate information about a film’s performance.

By box office performance, we vaguely mean the amount of money that flows in directly from ticket sales. The  accurate performance of a film is first compiled by the exhibitors who are actually selling the tickets which is then passed on to the distributors. Bollywood usually follows a business model where the distributors are hit the hardest if the required number of tickets are not sold.

The distributors are usually required to pay a huge sum upfront to get the rights of a film for a particular territory. They then pass on the film’s screening rights to the exhibitor (the cinema hall owners). So, now you have got the idea that the actual numbers solely rest with the guy screening the movie and there is no website or data-centre where the actual numbers (of how many tickets were sold) are recorded.

You either have to get the numbers over the phone from different distributors or wait for the producers to release the figures officially through a press release.

The problem is: In some of the circuits (that’s a term used for territories), there is no clarity on the actual number of tickets sold and may-a-times the numbers are allegedly approximates. A lot of times, the numbers are apparently changed before being passed on to the next level.

If the same thing happens in a lot of territories, it can have a large impact on the final number which might appear to be quite big even though it is not. It aids the fudging process because reportedly a lot of single-screens in the country still maintain these numbers on paper-registers as the tickets are manually numbered and sold.

This is just one way of fudging numbers though there are several other ways to do it. I won’t go into it as they are too technical.

How a producer stands to lose or gain from fudged figures?

Let us get this right, the producer’s income does not come from box office sales alone. There are several avenues that earns a producer money and if the film is marketed well then a producer is capable of getting back a lion’s share of his investment even before the film’s release.

The big chunk of the producer’s revenue comes from the following sources.

(b) Brand associations: Brands pay money to get associated with a film. Though now a lot of that goes into free publicity.

(c) Home video: There are separate rights sold for bringing out films on DVDs.

(d) Overseas rights: Bollywood films earn huge money as they are released in a lot of other countries outside India.

(e) Music rights: Money flow in from the film’s music license rights too.

There are lots of other sources from where a producer can get back his investment but I am not going into that. But this is for sure that today a film producer doesn’t depend on the box office performance of his film like what used to happen during the days of the golden oldies.

I have heard that in some cases, inflated box office figures have been part of the film’s publicity plan too! 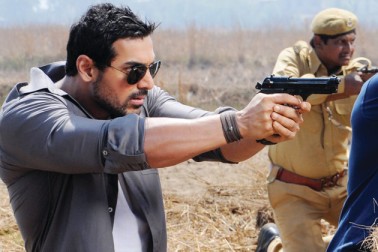 Coming back to the big Eid releases which are Chennai Express and OUATIM (though technically it releases six days after Eid), the trade will be keenly following the race to the 100-crore mark. People will not only calculate how they reach the mark but how fast they reach there.

If you ask me, I will be keenly following the tweets of Bollywood trade experts Komal Nahata and Taran Adarsh. How many of you want to bet with me that their figures won’t match?