The myths about Divya Bharti

We have received 18 mails requesting us to write about the tragic death of Divya Bharti. We kept on postponing it because it is difficult to get first-hand information about her. Also, there are too many websites talking about her untimely death and speculating whether it was a suicide or murder.

We thought we should first bust a few myths before talking about her tragic death. It took us a few days of research, but here they are.

First, let us introduce Divya Bharti. Divya is regarded as one of the most prolific actresses during the 1990s. She achieved dizzying heights of success before her life was brutally cut short by a bizarre incident.

When she was just 19, she died after falling off from the balcony of her fifth floor apartment in Versova, Andheri. Till now, many in Bollywood speculate that she was thrown off her balcony.

Myth 1: Divya Bharti made her debut opposite Sunny Deol

Reality: Divya Bharati dropped out of school when she was in class nine to do a Bollywood film but she couldn’t manage to get a break. A lot of Bollywood producers begged with her parents to let her act in their films but they either signed some other actress or the project was eventually dropped. She had to go down south to get her first break where she got a chance to act opposite Telugu superstar Venkatesh in the film Bobbili Raja. The film was produced by D Ramanaidu, Venkatesh’s father. The film was a superhit. Though she started her career in 1988, she couldn’t manage to act in a Bollywood film till 1992. But by that time she was a huge star in Hyderabad.

Here is the video of a song from her debut movie Bobbili Vijay. The video is a bit crude and some parts might look distasteful. Kindly ignore the flaws for the sake of watching Divya Bharti’s debut film song.

Myth 2: Divya started her career with a big hit in Bollywood

Reality: Divya Bharti couldn’t to score a hit during her initial days in Bollywood. Her debut film Vishwatma was an average grosser. The next film also flopped miserably but she managed to catch everybody’s attention, specially that of the media. Even in the face of such big failures, Divya remained optimistic about becoming a successful Bollywood actress. Her first success came opposite Govinda in the film Shola Aur Shabnam.

Here is a very rare interview of Divya Bharti where you will get an inkling about the feisty woman that she was. Apologies, as the  video is edited poorly.

Reality: Some of the films that Divya Bharti had signed but couldn’t finish became huge hits. Other actresses were cast in her role and the same films got a rousing reception at the box office such as Mohra (Raveena Tandon-Akshay Kumar) and Vijaypath (Tabu-Ajay Devgn).

Here is a leaked video of a few scenes of Laadlaa that Divya Bharti had shot just months before her death. Later, the same scenes were re-shot by Sridevi. In this video you see Divya and Sridevi in the same scenes, one after another. I am sure a majority of you have never seen this footage before.

Myth 4: Divya Bharti was alone in her apartment when she died

Reality: On the day of her death, she had cancelled her trip to Hyderabad because she had wanted to stay back in Mumbai. She was happy because she had bought a flat for her parents in Bandra West. During the final hours of her death, she was with her closest friend — fashion designer Neeta Lulla. Also present in the same room were Neeta’s husband, Dr Shyam Lulla and her maid for many years, Amrita. All these names were put down as eye-witnesses in the case which was initially registered as ‘unnatural death’ with the Andheri police station. The case has now been closed because the police couldn’t complete their investigation.

Here are some chilling pictures of Divya Bharti after the accident. The pictures are graphic so don’t go through the album if you don’t want to. 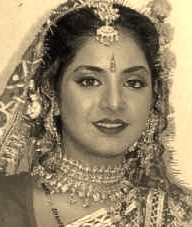 Divya at a shoot 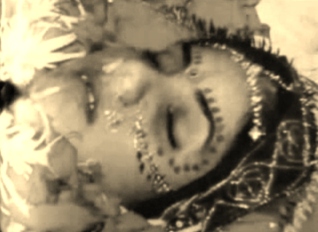 police photo of her deadbody

Myth 5: Divya Bharti was on drugs because she was terribly depressed

Reality: Divya Bharti was cheerful by nature. Nobody saw her getting depressed ever. There is not a single testimony that she was depressed before she died. Here is a rare video of her parents and friends clearing the air to the media on whether she was depressed or on drugs.

If you are looking for the post that tells you the story of how Divya Bharti died, then read our next post -> Divya Bharti: A death untold