Set Kangana Ranaut free. She has had enough already.

Kangana Ranaut pictured during the early days of her career

Of all the controversies that Kangana Ranaut is currently embroiled in — three are major.
All the facts and records of two of them are in public domain — there is nothing left to the public imagination. One of the controversies relates to Aditya Panscholi and the other relates to Karan Johar.
The Aditya Panscholi controversy is 11 years old. There are police records and published testimonies relating to the public spat between her and Aditya Panscholi. The controversy has made a comeback every time Aditya Panscholi or Kangana have gotten themselves into a scandal or a fight. Basically, nothing is left to the public imagination.
The Karan Johar controversy was part of a TV show (Koffee with Karan) and it started a much publicised debate in Bollywood on ‘Nepotism’. The junta knows every bit of that too. Also, that controversy is more on morality, fair business practices than scandalous, personal details.
There is nothing to ‘reveal’ more about the above two.
What you and me don’t really know about… is the Hrithik Roshan controversy.
This is a grey area where conflicting statements abound. This is an area where a lot of us are confused about what really happened between the two of them. 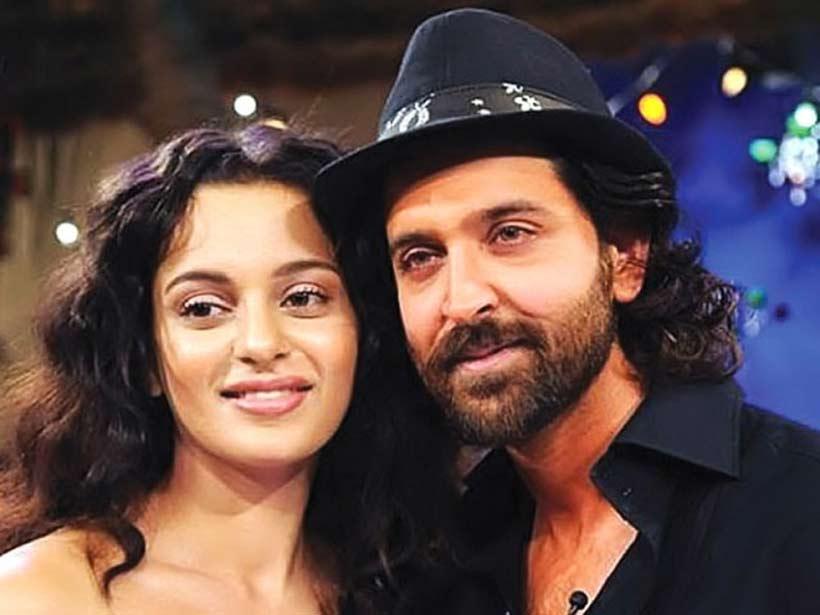 Kangana Ranaut and Hrithik Roshan during the promotions of Kite. This when, according to Kangana, they were having an affair

Kangana has claimed that she had a torrid affair with Hrithik when he was married with Sussanne Roshan. Hrithik, on the other hand, has claimed that Kangana suffers from Asperger’s Syndrome and had made up (read ‘imagined’) everything (including love letters in the form of emails and the bare details of the affair) in her head.
A police case has been filed by Hrithik Roshan but it has been subsequently closed due to lack of evidence with both sides claiming victory. While camp Hrithik Roshan has leaked all of Kangana Ranaut’s love letters to the press, Kangana has used the same letters to prove that she was not lying.

This is the only major scandal in Kangana’s life and in Bollywood where nobody can put their finger on the truth and this is what makes it more interesting. This is also the reason why this has generated so much of public interest, apart from the fact that it is intimate in nature and concerns to two major Bollywood stars.

The recent spate of interviews by Kangana Ranaut has brought back the issue in public domain again — with Kangana claiming that Hrithik is lying and none other than Hrithik’s ex-wife Sussanne Roshan, time and again, jumping to her ex-husbands rescue in the face of an attack from Kangana.
This time too she has sent out a tweet in his defense.

The is no allegation or sad plot that can have the weight to triumph over a good soul. #powerofthetruth #mafamilia #goodoverevil 😇🖤🌈🦋 pic.twitter.com/WlVKbIhFjE

We don’t know who’s lying and who’s speaking the truth. However, let’s assume for a moment that whatever Kangana Ranaut is saying is gospel truth. I know that a lot of people out there including myself, believe that, Kangana might not be lying about her affair with Hrithik Roshan.

She is saying with so much conviction, in such detail and with so much emotion… that it seems impossible that she is faking it.
But that is not the problem, rather just the start of a bigger problem for Kangana that we are anticipating.

Kangana Ranaut with Adhyayan Suman, another controversy that the Indian press raged about till last year before it lost steam on its own

She is flogging a dead horse and she puts her career at stake by doing it
The fact of the matter is, Kangana Ranaut is not saying anything new. She has already made all the allegations before and she had also presented a written submission of the same to the Mumbai Cyber Crime Department.
The Mumbai Police Cyber Crime Department has closed the matter and Hrithik also had decided not to pursue the matter.
There was no need for her to bring up the matter again in front of the public again. Every time she opens a closed chapter, a new person gets linked with the scandal.
Like this time, she has dragged in State Women’s Commission chairperson Vijaya Rahatkar who tweeted that the Commission wasn’t involved in this controversy any way. Kangana said in the show that a Women’s body pursued her to drop the charges against Hrithik Roshan. Here are Vijaya’s tweets.

It was found out much later that the person Kangana is actually referring to (the Women’s Committee member who asked her to take the complaint back against Hrithik Roshan) is GurMeet Kaur Chadha, the vice president of Women’s Committee of the Congress party.

Apart from Kaur, the most high-profile entrant into the controversy, is Katrina Kaif.
Kangana revealed in her ‘testimony’ to Rajat Sharma that she called up Hrithik Roshan after she heard reports that he was having an affair with an actress when he was shooting with her in Manali. Kangana never named Katrina Kaif in her interview though. Katrina Kaif was the actress who was shooting for Bang Bang in Manali with Hrithik Roshan.

This time the controversy has again gained traction with the media and the timing of all this is not right because the release of her next film, Simran, is just around the corner. She already had her fair share of controversies regarding the screenplay credits of the film.

Kangana actually doesn’t gain anything by bringing a dead controversy back into the public domain.
She only has lots to lose.
She already had a colossal flop in Rangoon and she could have done better by just sticking to lambasting award shows and nepotism in the Rajat Sharma interview. Instead she chose to answer all his questions the way he put to her. The show was a runaway hit. So much so, Rajat Sharma declared that he never had a more controversial Aap Ki Adalat in the show’s 23-year-old history.
But for Kangana, this was an unnecessary step and I don’t think anybody disagrees on that. She has got nothing to gain from what is happening around her.
Bringing back the Hrithik Roshan controversy is definitely bad PR and nobody, in their right frame of mind, would advise her to do such a thing before her film’s release which is squarely resting on her shoulders. God forbid, if this film doesn’t do well then everybody is sure to blame her for the debacle.
Now, the question is…
Why is Kangana throwing the PR rule-book out of the window?

Kangana Ranaut relies heavily on her sister Rangoli Chandel, including handling all her film assignments.
Apart from being her greatest confidante, Rangoli Chandel is also her manager. If Kangana listens to anybody in the industry then it is her sister Rangoli. Rangoli doesn’t have a background in media or Bollywood. She is doing her best that a sister could do and of course, she has done everything in her capacity to protect her sister.

But she is soon going to take a break because she is going to have a baby. Kangana too is at a very crucial stage of her Bollywood career. From here on, it is more or less certain that none of the established Bollywood superstar heroes (and their network of powerful friends) will work with her. She is on her own in Bollywood and she has achieve everything on her own steam.

It is very necessary that Kangana succeeds because she is at a stage where she can show the world that a woman from the ‘outside’ without any background in films can make it on her own without caring two hoots about the male superstars and the parasites that survive around them.
To so that, Kangana needs to take her attention away from gratifying journalists by answering their questions.

It is now my humble submission to Rangoli that Kangana has answered every question that anybody needed to know about her past life and the recent controversies. There is no question that she hasn’t answered. Anything more she says will just be an echo of what she has already said before.

Kangana has already got enough flak for being frank. There is no need to invite more brickbats into her life.
Perhaps, it is time to consider a senior media PR professional to step in and start a media spin to deflect all the negativity towards something positive. Kangana has had enough already, there is no need to involve her into more controversies that has got nothing to do with her work. Any experienced PR would be able to achieve that if Kangana listens to her.

Kangana is a human being after all. There are limits to how much pressure one can take. The pressure of battling her past needs to be taken off from her shoulders. This is an endless conundrum that has already claimed many talented actors in the past. She cannot be one more addition to that list.

Apart from prying journalists who know that Kangana Ranaut is a sure shot TRP driver, there are also plenty of fame-seekers who know that baiting Kangana Ranaut into a fight or a controversy will bring them into the limelight.
There were names who were never in the fore before in Bollywood, but thanks to their fights with Kangana, articles are being written about them now.

Kangana needs to be set free… to reach the highest point in her Bollywood career.
These controversies are giving her anything but the wings that she needs right now.