There’s no point in mincing words now. Everybody knows it but they are just not saying it.

It is the brainless Bollywood media which created a Frankenstein called Messenger of God out Gurmeet Ram Rahim Singh. 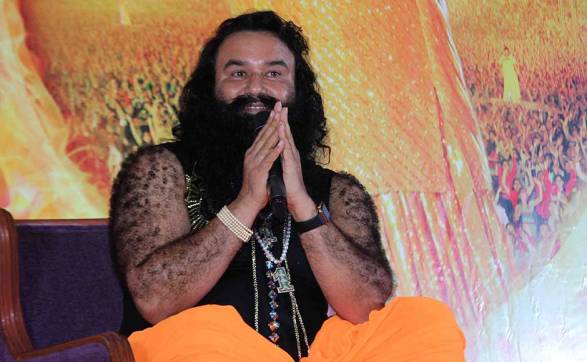 Gurmeet Singh or MSG during the promotions of one his earlier films. This is before he decided to wax his hairy arms to become more presentable

They invited him for interviews, on TV shows, gave him awards, reviewed his films and even made feature stories on him. ‘MSG’ (taken from Messenger Of God, his first film) as Gurmeet Singh was popularly known in the Bollywood media circles — kept every large media company on his payroll who, in turn, were ever hungry for his advertisements and paid media content.

Gurmeet Singh or MSG (I will use this name henceforth) was a particularly generous media spender and the frontline sales people loved him for that. Just ask around in the media sales circles and they will tell you how they eagerly waited for his releases because he would invariably buy lots of airtime or full-page advertisements.

Before demonetisation, according to a lot of my sales colleagues, MSG would prefer to pay in cash. Post demonetisation, his media spend was stunted but his films continued to get released, unabated.

However that is not the point. MSG wanted to spend and the media houses were more than willing to accept those orders.

There is no clash of ethics over here because there were nothing wrong with the ads except for the fact that it was an assault on finer human senses.

But it was the so-called journalists and PR middlemen who made this man into a humongous celebrity that he became in a matter of two years.

MSG was always known as a religious leader of a particular north Indian sect but his decision to foray into Bollywood gave him international fame and helped him expand his business empire. It won’t be wrong to say that the rapid expansion of his kingdom and properties were a direct result of his Bollywood foray as ‘hero’.

Just visit the website of any mainstream media house, you will find promotional articles of MSG that were done by ‘prominent’ journalists. These articles — waxing eloquent of MSG — was supposed to be examples film journalism.

Some of the most reputed film journalists — who boast of ethics and morality at the drop of a hat — have engaged with MSG to give him free media space.

It won’t be proper to pin-point any particular mainstream media house because everybody is guilty of bowing down to ‘intense’ PR pressure.

It must also be noted that, some of the mainstream English media houses did ‘hilarious and funny’ interviews with the MSG because a ‘normal’ interview will look utterly stupid on their websites.

But still they went ahead and featured him on their print pages, TV slots and home pages.

If the reporters are guilty, then the Entertainment Editors are sinners.

It is them who allowed this to happen, year after year. Why? Just because a PR called them or somebody influential applied pressure on them to do it.

In most cases, they were too eager to wilt under pressure and went actively looking for an opportunity to meet this MSG. Ask each one of the them (maybe after they have downed a few pegs) and they will tell you the truth how they willingly took part in this MSG film festival.

NOT ONE senior reporter or editor asked MSG about his murder case, rape case or the most shocking charge of the castration of 400 (yes, FOUR HUNDRED) of his followers in order to bring them ‘closer to God’. All those cases are still pending before a court of law.

There were some journals that were religiously publishing the truth about MSG but it disappeared in the tsunami of news about his forthcoming films, thanks to the Bollywood media.

MSG and his followers were also one of the first to reach any disaster site and publish photos of their relief work which also received wide ‘critical acclaim’ from news editors and journalists alike.

Even though some media houses pointed out that MSG was using disaster sites as photo opportunities, nobody seemed to bother because for some strange reason, any positive news about MSG received too many hits on the website and migrated to the “Trending Today” columns within half a day, which am sure, I don’t have to tell you why.

MSG hawking his products on TV. He launched a range of Ayurveda and food products under his name

The lowest point in Bollywood’s worship of MSG came when he was given a film award for his outstanding contribution to cinema despite protests from several prominent people and a huge uproar on social media against it.

MSG also proudly posted a video clip of the same award show on his Twitter account. Here it is…

MSG was a religious leader alright but it was the film journalists covering Bollywood who made a celebrity out of him for best reasons known to them and us.

What are those journalists doing now? Well, most of them are now busy submitting the online links of their articles on MSG to their editors and web teams.

Some Entertainment Editors are busy scanning their organisation’s website to trace all the articles written on MSG and compile them together.

Just to be doubly sure that those Pulitzer prize worthy journalism are permanently deleted from their archives.