Akshay Kumar deserves a huge round of applause

This Friday witnesses two releases from diametrically opposite spectrums. On the one hand, while there is a hopeless adult comedy that no family would be able to sit and watch together, on the other, there is heart-stopping thriller Airlift which every family can and must watch together. We Indians, at multiple occasions, must have cursed our government and regret having born in this country and in fact, continue to do so. But this film will surely make you thank god that you were born in India and not in Kuwait.

There are films that come with the right soul and a strong vibe and you know in advance that it will be a soul-stirring celluloid experience. Airlift is that and much more. Firstly, to make a film on the biggest human evacuation that ever happened on the face of earth, especially the one that hasn’t gone in the record books, except for Guinness Book Of World Records, is no mean task. Like we all know, Airlift is listed in the Guinness Book of world Records as the largest human evacuation carried by any country with over 1,70,000 Indian refugees, residing in Kuwait, ported safely back to their homeland.

If it hadn’t been for the man with a golden heart and with spine of steel, Ranjit Katyal (Akshay Kumar), this mission would have never got accomplished the way it did. Ranjit, who is a filthy rich Indian business tycoon, settled in Kuwait, decides to take the biggest and a seemingly unachievable mission in his own hands, after Iraq attacks, invades and declares a war against Kuwait. Ranjit, being a business magnet, has his contacts very well placed and is privileged enough to leave Kuwait with his family and fly out to London. But when he sees the inhuman killings, bomb blasts, millions of innocent Kuwaitis being murdered mercilessly, he decides to stay back with his fellow countrymen who aren’t as rich and privileged as he is, and decides to stand by them no matter what! His only wish is that he doesn’t want Indians to die such inhuman deaths.

In case of such films, the less said the better because one really has to watch it to experience it and to believe it, to believe the unbelievable human massacre that Saddam Hussain executed in Kuwait in 1990 and how almost two lakh Indians, after living a life nothing less than hell, travelled back to India under such inhuman circumstances. What Ranjit Katyal does, who all he meets, how he travels to Baghdad and even Iraq for help and how he impeccably manages to execute world’s largest human evacuation is absolutely worth watching. Despite being one of the richest and powerful people in Kuwait, how helpless Ranjit becomes, but still decides to fight for his countrymen, is heart-stopping!

Akshay Kumar deserves a huge round of applause and a standing ovation for agreeing to do and support a film made on an incident that has no proofs or traces or evidences in any government file whatsoever, an incident that no Indian, apart from the ones stuck in Kuwait, were even aware about until now. Akshay, as Ranjit Katyal, is absolutely brilliant and has nailed the character like no other actor could have ever done. When he cries, you will get lump in your throat, when he is held by the Iraqis, you will get goose-bumps and when he emerges triumphant, you would want to stand up and applaud his elephantine achievement. Akshay had started 2015 on a great note with Baby and this time too, he starts the year on a brilliant patriotic note. 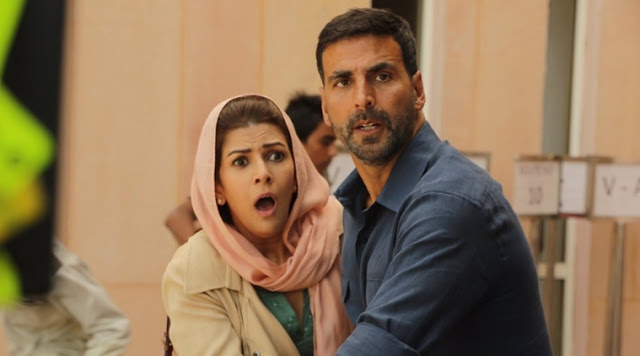 Nimrat Kaur, who plays Akshay’s wife, looks gorgeous and has done a terrific job. It’s a refreshing change to see her as a strong-willed, supportive wife, who decides to stand by her brave husband like a rock of Gibraltar through thick and thin. Inaamulhaq, as cunning, manipulative Iraqi Army General, has done a fantastic job and so has Kumud Mishra who plays an officer at Ministry of External Affairs, who goes all out of his way to help Ranjit Katyal in making his mission successful.

In the beginning of this review, I mentioned that every family must go and watch this film, not only because it’s a neat and clean film meant for family audience, but also because it will compel you to love and value your family more than you ever did. And yes, the climax, when 1,70,000 Indians board Air India flights back home, it will leave you teary-eyed for sure. Watch this one not only because it’s a brilliant and well-made film with some outstanding performances, but also as a tribute to the man who made the impossible, possible and to all the Indians who displayed unbelievable unity, strength, courage, compassion, integrity, patience and resilience during the toughest and most trying time of their life. Hats Off!