The rise and fall of Mamta Kulkarni’s boyfriend Vicky Goswami 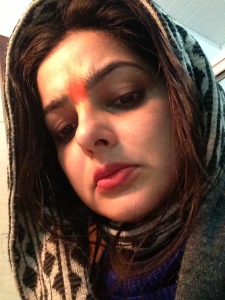 In my last blog I shared an exclusive photograph of Vicky Goswami and told you the story of how from being a simple supplier of drugs at high-profile parties of Mumbai, he stepped into the business of manufacturing drugs.

I also shared an exclusive photo of Vicky Goswami from the police files of South Africa. On your left (below) is the original version of the photo that I got. This is also the last photo of Vicky that the police have got.

Today, I will tell you the story of how Vicky Goswami became the undisputed drug kingpin in Southeast Asia. The story of his rise to the top of the drug chain is captivating to say the least.

I also told you that the ex-president of the South African Football Federation, Irvin Khoja, played a prominent role in shaping Vicky’s career. He allegedly played Godfather to Vicky in South Africa.

Here is a newspaper report detailing his ‘murky past‘ in case you are interested to know more about Irvin Khoja.

To know about a gangster, one should always refer to his Godfather. In this case, Khoja and his dealings have always been shrouded in controversy. Here is another newspaper report that talks about the mounting public pressure on Khoja that ultimately led to his resignation from the South African Football Federation.

But before you go into this story, I suggest you read to the first story again as this story is a continuation of the earlier post.

In 1983, Irvin Khoza was arrested at Lusaka International Airport after he was caught with a box of Mandrax tablets while boarding a flight to South Africa.

The consignment that Irvin was carrying soon led to Milanos Constantino who was the only other Mandrax supplier apart from Vicky Goswami to Khoja. Constantino was a far bigger supplier than Vicky and Vicky who came a distant second when it came matters of turnover. Hence Vicky was more of a loyalist than a friend of Constantino. But after this much-publicised haul, the Zambian police started closing in on Constantino, a Greek national. He soon fled the country after an arrest warrant was issued against him.

Before Constantino left Zambia, he willingly handed over the reigns of his empire to Vicky in the hope that one day Vicky will return his empire to him.

Nobody heard of Constantino again and Vicky became the undisputed druglord of Zambia.

(2) Why Vicky had to leave Zambia overnight

The absence of Constantino virtually made Vicky the only contact Khoza had in Zambia.

Goswami remained in Zambia and continued dealing in drugs. Being the only manufacturer of Mandrax, Vicky soon amassed such huge wealth that it was impossible for him to hide it anymore.

Goswami became powerful and rich within a small time and the Anti Corruption Commission (ACC) of the country soon started investigating him for alleged drug trafficking.

After the investigations, the commission found him guilty and recommended that Goswami should be deported back to India and declared a “prohibited immigrant”. The news was publicly published in a Government Gazette of Zambia on 28th January, 1994. This was done to alert police officials, who were on Vicky’s side, to stay away. An alert was sounded at the airports within 24 hours.

But before Goswami could be served with deportation papers, he fled to South Africa, allegedly with the help of Irvin Khoja.

Even though he left Zambia within 24 hours of the police alert that was sounded against him, Goswami could bring in some of the wealth that he had managed to amass. He, of course, brought his supreme organisational skills as well.

Police records indicate that Goswami started investing in real estate soon after he arrived in Johannesburg. He bought a house in Bryanston and offices in Sandown.

Soon, he was back in business and started trading in drugs. Here too he rose quickly and created so much of wealth that it was difficult for him to remain low-key.

His most dramatic move was when he purchased a private jet to move his consignment from Lanseria Airport located near Johannesburg This is exactly when he came under the radar of the South African police.

But the police didn’t bust his private logistical network, instead they started trailing him for more clues.

It is alleged that Vicky Goswami operated his own Mandrax manufacturing factory in Johannesburg and had some of the South African Narcotic Bureau (SANAB) officials on his payroll. Hence he never got caught.

But trying to settle old scores landed Vicky in big trouble. Vicky found himself on a sticky wicket when a self-confessed drug dealer, Robert “Rocks” Dlamini, disappeared while he was on his way to meet Irvin Khoja on the 6th April 1995.

Police records state that Dlamini was picked by two men in a car to meet Khoja.

According to the police report filed by Dlamini’s family, he was supposed to collect a R1.5-million (Rands) payment that Vicky owed him. The money was from a drug deal that went sour and Khoza was collecting the sum on Vicky’s behalf.

But within 30 minutes of Dlamini entering Khoza’s house, two gunshots were heard.

Till date, Dlamini’s dead body has not been found and the Johannesburg police has instituted a reward of R250 000 (Rands) reward for any information about his whereabouts. The reward has not been claimed since 1996.

The case remains unsolved till date but though independent investigations by newspapers in South Africa have straightaway put the blame on Vicky and Irvin. Here is one such report.

(5) Vicky is exposed in a sting operation

Soon an investigative journalist called Chris Steyn-Barlow was put on Vicky’s trail with the active help and cooperation of the Johannesburg Police. Steyn-Barlow did a sting operation on him and the expose was published under the headline, ‘Biggest drug lord in SA builds huge empire’ on March 28 1996.

Just like what he did in Zambia, Goswami abruptly left the country and landed in Mumbai. He left behind a posse of luxury cars and properties worth millions of Rands which was seized by the police. The private jet that was parked at the Lanseria airport was also seized by the authorities.

(6) Vicky moves to Dubai and gets jailed

After staying in Mumbai for a few months, Goswami moved to Dubai where he tried to rebuild his drug empire. He allegedly set up two Mandrax manufacturing plants in Dubai after bribing some local officials there.

But the South African police kept following him and helped the Dubai police to nab him. Johannesburg police also started a joint operation to nab his business partners in Mozambique and South Africa and it soon led them to his supply chain.

The Dubai police was contacted and Goswami was arrested with Mandrax worth $6-million in 1997. He was convicted and handed down a life imprisonment term. Following his arrest in Dubai, the Narcotics Control Bureau busted some his links in India. Here is one such report. The Dubai Police too made a few arrests after interrogating Goswami, here is another report.

The rest of the story is quite known and this is where the South African police loses Vicky’s trail.

Vicky, now 52 years old, was released from the Dubai prison on November 15, 2012, 16 years after he was sentenced to life imprisonment for smuggling 843 kg of methaqualone (Mandrax) and establishing two factories in Dubai to make the drug.

Vicky’s release from jail was very hush-hush and it only made it to the newspapers in South Africa where he ruled as a drug-lord once. Newspaper reports also speculated that Vicky is also looking to inch his way back into South Africa to claim his lost fiefdom. That speculation is wrong.

“A life sentence in Dubai is in effect 25 years, but prisoners can apply for early release on various grounds. Apart from good conduct, these include learning to recite passages from the Qu’ran or converting to Islam. To strengthen his clemency appeal, Goswami converted to Islam and was married according to Islamic rites while incarcerated,” says the article that appeared in the Mail & Guardian newspaper of South Africa which followed the drug lord after his release.

Sources have confirmed that the girl who Goswami married to was, in fact, Mamta Kulkarni.

Though the opposition lawyers strongly opposed his clemency appeal saying that he was an international criminal, the court pardoned him on grounds that he was a reformed criminal and a devout Muslim. The court also ordered that he be deported to India.

Sources say that Vicky arrived in India during December 2012 and left for Kenya soon after. Vicky did not have any specific criminal cases pending against him in India and along with his new name, it was easier for him to fly to Kenya.

This is where we all lose trail of Mamta Kulkarni’s partner, Vicky Goswami.

Update on October 13, 2013: “The person in the photo is not Vicky Goswami,” says Mamta Kulkarni on her latest blog addressed to me. Fairness demands that I acknowledge the rejoinder. Here is link to the denial -> http://bit.ly/17mUKYj